The first time I tried to photograph a rosy-lipped batfish I was too cavalier in my approach. I spooked the fish, and every time I tried to get in front of it to compose a frame the fish turned away. My box score read zero usable images. 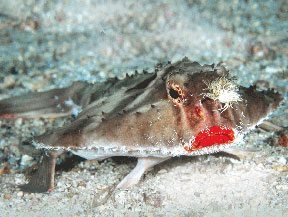 So, on a recent trip to Cocos Island, Costa Rica, when I learned that other divers had seen several rosy-lipped batfish, I was eager to get another chance. However, my only opportunity to dive in the area where the batfish had been seen would mean a relatively deep dive. Clearly, I would be limited by bottom time considerations.

Having a short bottom time and knowing that the subject I sought might be easily spooked were important considerations as I developed my photographic dive plan. My first concession to limited bottom time was to opt for my 100-mm lens instead of my 50-mm lens. In an ideal situation I would prefer to get close enough to a 5-inch-long (13 cm) fish to fill a pleasing percentage of my frame with the fish while using a 50-mm lens. But experience had taught me that I would have a better chance to fill a pleasing percentage of my frame without causing a rosy-lipped batfish to turn away from me if I chose a 100-mm lens.

Not being absolutely certain as to how close I could get to my desired subject, I increased my ISO from 160 to 320. This would allow me to close down my aperture by one full f-stop, thus increasing my depth-of-field, while also getting a little richer color from the use of my strobes.

On the dive I got lucky and spotted a batfish early on. Once I got into a good shooting position I exposed several frames, making sure that the fish’s eyes, bright red lips and other facial features were in sharp focus. Then I inched my way closer and exposed another series of shots. I repeated that routine two more times. At that point it was time to ascend.

Looking back on my two rosy-lipped batfish encounters, it is easy for me to see that while a rosy-lipped batfish might be an uncommon fish, my path to photographic success was anything but. There is no doubt that in many scenarios a well-thought-out plan often goes a long way toward achieving success.