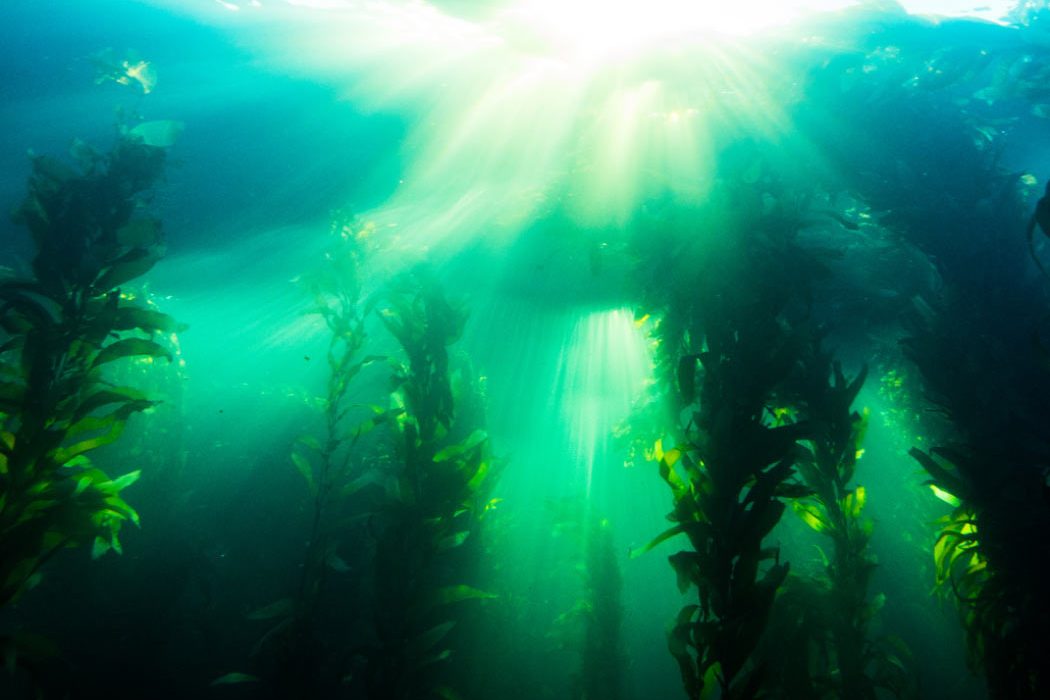 Few sights in the natural world are as spectacular as that of a healthy forest of giant kelp witnessed on a day when the sky and water are clear, the sea is calm and sunlight penetrates the sea. On days like these, when you slip below the surface you enter a magical world where shimmering rays of sunlight dance through a golden undersea forest of towering fronds of giant kelp. The golden hues of kelp stand out against the blue-green water. Descend 20-30 feet (6-9 m) and you soon become aware that the entire forest is swaying back and forth in perfect rhythm with the ocean’s ebb and flow as waves roll gently overhead. Look up and you will see a golden canopy of floating fronds bunched at the surface. Flickering rays of sunlight illuminate the canopy’s captivating color changes ranging from almost brown to radiant gold.

While the kelp is undeniably beautiful and a swim through a kelp forest is certain to be an unforgettable experience, diving in a kelp bed provides far more than just an opportunity to look at kelp. More than 800 species of marine animals have been documented to inhabit kelp forests, and while some of these creatures are microscopic in size, the easily visible species range from tiny rainbow-colored nudibranchs to the occasional California gray whale, creatures that reach proportions of 50 feet (15 m) and 100,000 pounds (45,000 kg). Commonly seen kelp forest residents include California’s state fish, the bright-orange damselfish known as the garibaldi, schools of jack mackerel, giant sea bass, opal eye, blacksmith fish, and the occasional school of barracuda. Along the sea floor divers enjoy encounters with brilliantly colored gobies, curious blennies, colorful but well-camouflaged sculpin, cabezon, and lingcod, moray eels that are often accompanied by cleaner shrimps and more than 60 species of rockfishes.

A host of fascinating invertebrates are also known to call the kelp forest their home. Colonies of hydroids and bryozoans grow on the blades of giant kelp, while California spiny lobsters, a variety of stunningly colorful anemones and sea stars as well as snails, octopuses and so much more await along the seafloor. And in some places divers have a great chance to swim with cavorting California sea lions and curious harbor seals in a world where you can never be quite certain what you will see next.

Not an Animal, Not a Plant

When I was certified in the early 1970s kelp was called a plant. In those days scientists classified living organisms as either being in the kingdom of animals or the kingdom of plants, with a kingdom being the highest taxonomic grouping of similar organisms. Since then taxonomic specialists have added three kingdoms: fungi, protozoans and eukaryotic (yOOkâr’E-Otik) algae, and blue-green algae.

So although kelp is commonly called a plant, according to scientists, all types of kelp are actually types of eukaryotic algae.

Algae are simpler than flowering plants that lack tissues to carry water and food from one part to another. Nevertheless, the algae we commonly call seaweeds show an amazing ability to flourish in conditions that are far too harsh for flowering plants. Forests of giant kelp illustrate this point as this alga thrives in areas where current and water motion are too strong for many plants. The unyielding water flow is actually advantageous for the kelp as the water supplies the kelp with a continuous supply of vital nutrients such as nitrogen and potassium.

The mainstay of Southern California’s kelp forests is a species known as giant kelp (Macrocystis pyrifera). This species occurs from Santa Cruz, California, to Turtle Bay, Mexico, but giant kelp is only one of the 20-some species of kelps that occur in California waters, and in many instances there are a variety of kelp species found in a single kelp forest. A kelp bed, or forest, is defined as a number of fronds of kelp growing near one another. A small kelp forest might cover an area of only a few hundred square yards while large kelp beds might be as big as 10 square miles (26 sq km). Many kelp forests farther north, from central California to Alaska, are dominated by bull kelp (Nereocystis luetkeana).

An individual frond of giant kelp can attain a length of 200 feet (61 m), but giant kelp rarely grows from any deeper than 130 feet (39 m). The golden fronds grow straight up from the rocky seafloor to the surface, where they stretch to form a floating canopy. During times of ideal growing conditions the canopy can be up to 10 feet (3 m) thick. 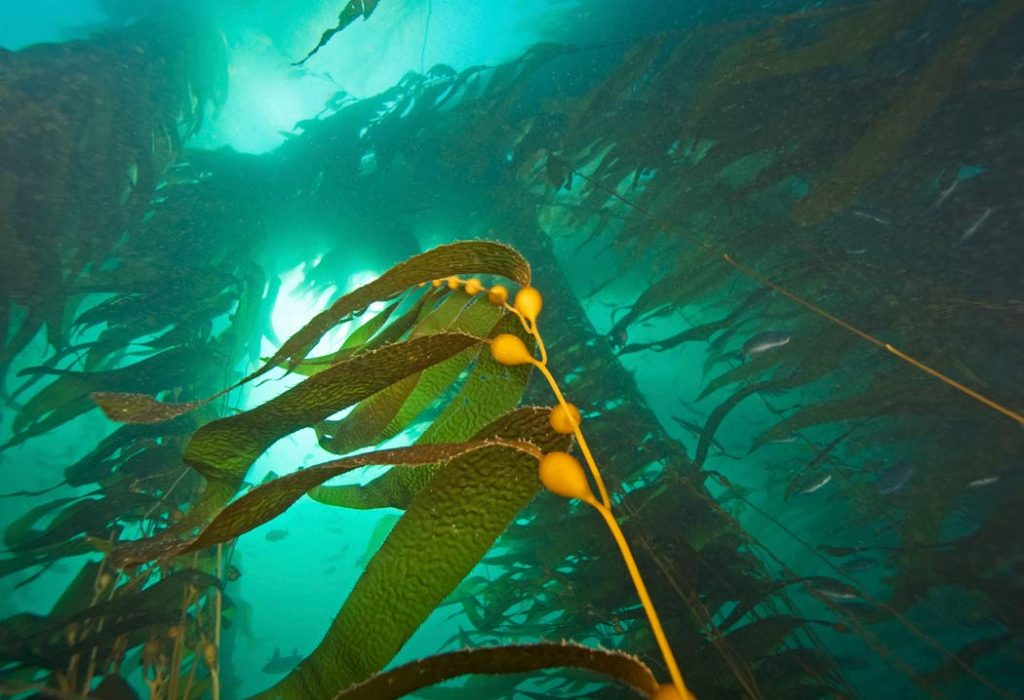 The buoyant fronds of mature kelp are composed of three parts: a stemlike stipe, leaflike blades and gas-filled spheres, or bladders, known as pneumatocysts. The fronds are anchored to the seafloor by a part of the algae known as the holdfast. A holdfast resembles a tangled ball of roots, but kelp has no roots as the holdfast’s thin, sturdy, spaghettilike strands known as haptera do not penetrate the substrate, as is the case with the roots of flowering plants. And unlike flowering plants that absorb nutrients through their roots, kelp absorbs nutrients through all parts of its tissues.

Giant kelp is the largest and fastest-growing of all the kelps (with the possible exception of bull kelp). In ideal conditions a single frond can expand its length by as much as 2 feet (0.6 m) in a 24-hour period. This rapid growth is at least in part due to this kelp’s amazing ability to convert sunlight into energy as all parts of a kelp frond take part in photosynthesis. In addition, the gas bladders float the kelp toward the surface where the penetration of sunlight is at its highest, thus allowing mature fronds to maximize their exposure to sunlight.

Healthy forests of giant kelp require a rocky bottom to give the holdfasts places where they can attach and water temperatures that stay between 50 and 68 degrees Fahrenheit (10 and 20 degrees Celsius). The holdfasts are well-designed to withstand the shock and pull of wave action and surge during storms, but giant kelp beds are quick to suffer when the water warms during the periodic oceanographic and meteorological phenomenon known as El Niño. Even when water temperatures are favorable, strong winter storms routinely rip holdfasts free of the seafloor, and if you have ever visited a Southern California beach soon after a big winter storm you have likely seen big piles of seaweed washed up onto area beaches. The bulk of that seaweed is usually giant kelp.

When thriving, kelp forests help to reduce beach erosion as the kelp beds soften the force of waves before they crash against the shore.

Kelps reproduce in a cycle known as alternation of generations with the complete reproductive cycle consisting of two generations: one that reproduces sexually and a second that reproduces asexually. The large kelp fronds we see when diving are the asexual form known to scientists as sporophytes. They release one-celled spores that develop into male and female gametophytes, microscopically sized sexually reproducing kelp that we never see. After a gametophyte egg is fertilized, it develops into a mature sporophyte (spOr-O-’fIt), thus completing the reproductive cycle.

If it is fortunate enough to find a place to attach itself, a juvenile sporophyte soon develops into a small, one-bladed plant. When this plant reaches a height of 3-4 inches (7.6 to 10 cm), the blade begins to split in two. Before this split is completed, the two new blades begin to split as well. As the process continues, fronds begin to develop and gas bladders soon appear at the base of the blades buoying the kelp as it grows toward the surface.

While most scuba divers head for tropical waters to enjoy the beauty of coral reef ecosystems, those who take the opportunity to visit Southern California kelp forests are in for a treat. Those who question the wisdom of diving in Southern California point out that the temperate water is colder than the water in tropical climes and that California does not have 365 great diving days a year, but those who have explored a healthy kelp forest on a day when conditions are favorable will tell you that there is not a more beautiful sight in the natural world.

At one time or another, probably when you were up too late and watching reruns of old television shows, you have seen giant kelp depicted as a man-eating monster evidenced by a kelp frond that “reached out” and entangled a diver. Good television based on sea lore? Perhaps. Bad science? Definitely. Here’s why: Kelp feeds itself via the process of photosynthesis as flowering plants do, and by absorbing nutrients out of the water column. In other words, there is no way that kelp can ingest a person. Second, kelp cannot reach. It floats, and lacking muscles gets moved back and forth by wave action, surge and current, but not by its own volition.

That said, it is still possible to become entangled in kelp when you dive. If you do, the easiest thing to do is to simply grab the kelp and lift it away from you. If, however, you get a little more seriously entangled, you can easily free yourself by snapping the stipes in much the same way that you might break a pencil, and with about as little effort. However, kelp stipes are highly elastic as they must be to survive the violent wave action during storms, and as a result, if you try to stretch the stipes until they tear instead of snapping them, you aren’t likely to succeed. The lesson here is “snap, don’t stretch.”

“The number of living creatures of all orders whose existence intimately depends on the kelp is wonderful. A great volume might be written, describing the inhabitants of one of these beds of seaweed … I can only compare these great aquatic forests … with terrestrial ones in the intertropical regions. Yet, if in any country a forest was destroyed, I do not believe nearly so many species of animals would perish as would here, from the destruction of kelp.”

Even though discoveries of so many species of insects and birds in tropical rain forests in recent years have made the literal accuracy of Darwin’s assessment erroneous, his recognition of the biological importance and diversity of kelp beds was right on target.

What do paint, fertilizer, shampoo, ice cream, beer, and fingernail polish have in common? The perhaps surprising answer is that they contain ingredients from kelp. Beyond its pure beauty, kelp has many practical uses. In 1911, the U.S. Department of Agriculture sponsored a study of kelp beds to determine the commercial usefulness of kelp, and since that time kelp has been used in numerous industrial and household products. During World War I kelp was harvested and processed into potash and acetone that were used in the munitions industry. Soon after the war it was discovered that kelp contained a thickening agent called algin that was useful in many products. Algin has a high affinity for water and is extremely useful as a suspending, stabilizing, emulsifying, gel-producing and film-forming additive that is used in hundreds of products ranging from eggnog, candy and cake mixes to paper-sizing, hand lotion and toothpaste.

In the mid-1990s researchers at NutraSweet Kelco Co. (a unit of Monsanto), the largest commercial harvester of kelp in the United States, began to research ways that kelp can reduce rejections of transplanted human organs as well as other medical applications. If studies continue to produce promising results, it is quite possible that kelp will be used to improve and save human lives.