When I spotted this yellow-barred jawfish while exploring a rubble area in Triton Bay, in far eastern Indonesia, I stopped to see if a photographic opportunity would present itself. 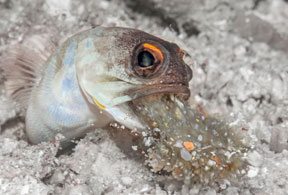 After a few minutes the jawfish begin cleaning its burrow. The fish repeatedly disappeared into its burrow before emerging with a mouthful of coral rubble and other debris that it spit out after rising above the opening and extending its body an inch or so forward. At first I thought it was a one-time thing, and that I had missed my opportunity to capture the house-cleaning behavior. But the jawfish kept working away, and I decided to see if I could capture the behavior.

My camera system was set up with a 100mm macro lens. The lens has a relatively short minimum focusing distance so I saw the potential to create a compelling photograph if I could get close enough to the burrow without spooking the jawfish. So, as I often do when hoping to get extremely close to animals without interrupting a behavior or causing the animal to turn away, I slowly backed away from the burrow and hovered a few inches from the seafloor.

Next, as I slowly settled into position, I focused on some debris that was about 18 inches (46 cm) from my camera. That is about as close as I thought I could get without disrupting behavior. Given my desire to use an ISO of 160, I also set my strobe power and f-stop to what I thought would be the correct settings. In this case the highly reflective rubble and sand bottom allowed me to close my aperture down to f-27, a setting that helped me maximize my depth-of-field. Closing down my aperture played a critical role in helping keep the fish and the debris within my depth-of-field (the area within the bounds of acceptable focus) because I could not be certain of the precise place where the action would take place.

Next I took a test shot of a nearby section of reef and evaluated the resulting histogram to see if I needed to make an adjustment or if I thought my exposure would be correct. Setting my camera controls and getting my strobes into the desired position before I got into my shooting position helped me minimize any movements that might frighten the fish. Then I ever so slowly inched my way forward.

Once in position I made sure that I was focused about 1 inch (2.54 cm) in front of the burrow so that when the jawfish extended its body out of the opening, I would be focused in the right place. At that point I had to be patient. Very patient. Luckily, after a few “spits” in the wrong direction, my patience and strategy paid off. The jawfish aimed in my direction and I got my opportunity, and the resulting shot.