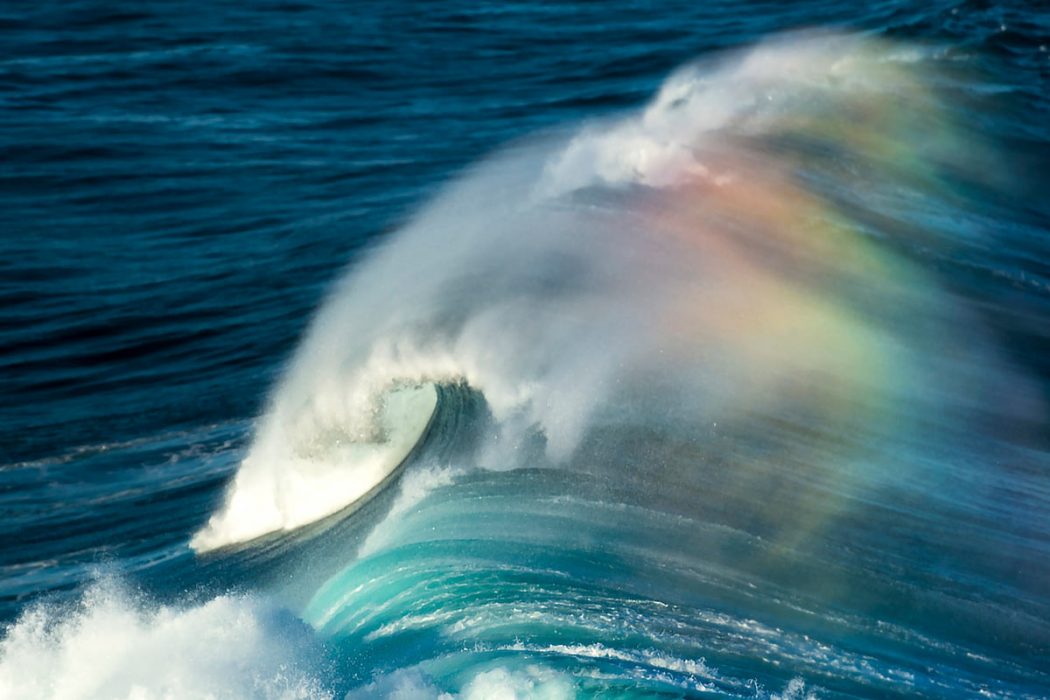 Most people don’t spend much time thinking about ocean waves. Those who go out on the ocean, however, can’t help but think about them. On even the calmest days the ocean is likely to have a gentle up-and-down motion as swells roll in. At other times, the motion isn’t gentle, and you begin wishing you hadn’t eaten so many tacos for lunch as the dive boat heads out to sea. The ceaseless motion of the ocean’s water, sometimes gentle, sometimes dangerously rough, defines life on the ocean.

“If clouds are the seaman’s bible, the ocean waves are his apostles,” Richard Van Dorn writes in his book Oceanography and Seamanship. “Endlessly wandering the vast, untrammeled oceans, they preach the gospel of Nature’s might, give warning of coming storms and — in milder moods — provide the endless, ever-changing panorama that exalts the spirit in a manner unknown to landbound mortals.”

Waves traverse entire oceans with little loss of energy. For instance, the big waves that draw surfers to Malibu Beach and other south-facing beaches in California are sometimes stirred up by storms in the Southern Ocean around Antarctica. A group of such waves, traveling at maybe 20 mph/32 kph across 5,000 miles/8,052 km of deep ocean, will take around 10 days to reach the U.S. West Coast.

While large waves encourage shouts of “surf’s up” along the West Coast, in Hawaii and even sometimes on the U.S. Atlantic Coast, they can engender a sense of foreboding to knowledgeable weather and wave watchers around the Caribbean Sea or other areas hit by hurricanes.

Long before the time of radio reports of storms from ships at sea, smooth, high waves rolling into shore on an otherwise calm day were recognized as a sign that a hurricane was over the horizon. On the morning of Sept. 8, 1900, Isaac Cline, head of the U.S. Weather Bureau office in Galveston, Texas, noted flooding in low parts of the city from huge waves coming in from the Gulf of Mexico against the wind that was blowing out to sea. The waves “told me as plainly as though it was a written message that great danger was approaching.” Cline wrote later, “Neither the barometer nor the winds were telling me, but the storm tide was telling me to warn the people of the danger approaching.”

The warning from the waves was too late, however, and by the next morning the hurricane had killed more than 8,000 people in Galveston and the surrounding area.

The waves that can make us seasick, excite surfers and tell of faraway storms are “wind” waves. As the name implies, they are formed by the wind pushing against the ocean’s water as the forces of water’s surface tension (for small ripples) and gravity tend to pull the water back to its original position.

Any wave, no matter what size, has a crest, a trough and a wavelength. A wave’s height is the distance from the bottom of the trough to the top of the crest. A wave’s “period” is the time it takes for a complete wave, from crest to crest, to pass a point. This, of course, depends on the wave’s length and its speed.

Imagine wind beginning to blow across a smooth sea, then picking up speed. Small ripples begin to form as the wind blows faster than 1 mph/1.6 kph, and by the time the wind’s speed reaches 10 mph/16 kph, you’ll see distinct waves with a few whitecaps. Small waves with periods of less than about four seconds are called “chop.” As they grow larger, with longer periods, the waves are called “sea.”

Even with a fairly steady wind, waves of different sizes will form, but the average size of waves can be calculated for various combinations of wind speed, fetch and time. For example, a 40-mph/64-kph wind with a fetch of about 300 miles/483 km blowing for 24 hours will create waves averaging about 14 feet/4 m high, with the highest waves more than twice that high.

Strong storms can create waves that are 50 feet/15 m high, with higher waves from time to time. While people have reported waves as high as 200 feet/61 m, the highest wave ever reliably measured was 112 feet/34 m from trough to crest. A Navy tanker, the U.S.S. Ramapo, encountered it on February 7, 1933, in the North Pacific. The measurement is considered reliable because officers and sailors on the ship’s bridge saw that when the ship’s stern dipped into the trough, the bridge, the ship’s crow’s nest on a mast and the top of the wave were in a straight line. They used this data to calculate the wave’s height. At the time, the storm had lasted seven days, and the ship had measured winds faster than 65 mph/105 kph for 34 hours.

Lighthouses have also provided measurements of waves. In 1861 a wave hit the Bishop Lighthouse on the Isles of Scilly off the southwestern tip of England, smashing a bell 100 feet/30 m above the ground. Eyewitnesses said the wave’s crest came down on the bell.

Winds, of course, do not create orderly waves. Anyone who’s been in the middle of a storm at sea, even a relatively weak storm, will describe the sea as “confused,” with waves of many sizes moving in different directions and many steep waves breaking to form whitecaps.

As waves move away from the wind that created them, the waves begin sorting themselves out into groups moving at the same speed and in the same direction. The waves smooth out and grow longer to form “swell.” In general, a period of around 10 seconds is considered the dividing line between “sea” and “swell.”

Whether they are sea or swell, waves carry energy, but not the water itself, in the direction of movement. If you could follow a molecule of water in a wave, you’d see that it is orbiting in an oval that’s moving down, backwards — compared with the direction of the wave — up and then forward.

The circular motion of the wave weakens with depth, and below about one-half the wave’s length, the motion is negligible. This means that when the water is deeper than one-half of a wave’s length, the bottom has no effect on it, making it a “deep-water” wave. A diver more than 10 feet/3 m below the surface will feel no water motion from waves on the surface that are 20 feet/6 m long.

Deep-water waves travel at a speed that depends on their length, with longer waves traveling faster than shorter ones. The result is that as swells move away from the wind that created the waves, they sort themselves out by length.

Anyone who has ever been at sea aboard a small boat, or even a large ship, or flown low enough over the ocean to see the waves, knows that the simple picture of trains of swells, nicely sorted by wavelength, doesn’t begin to describe the real ocean.

Only a little way from shore, you see that the ocean has swells of many sizes coming from different directions, with waves being created by local winds on top of them. Sometimes the crests of waves in two different trains will come together to create, for an instant, a wave that’s about as high as the two waves, one on top of the other. From time to time the crest of one wave will fill the trough of another, creating a “flat” spot in the ocean.

In rare cases, large waves from different trains come together to create the “rogue” waves of legend. Scientists also believe rogue waves can be created by waves moving over an ocean current flowing in the opposite direction from the waves.

Willard Bascom tells the stories of several famous rogue waves in his book Waves and Beaches. These include the story of the Queen Mary, which in 1942 during World War II was carrying 15,000 American soldiers to England through stormy seas. Without warning, a “freak mountainous wave” hit the ship’s side, pushing it over until “her upper decks were awash and those who had sailed in her since she first took to sea were convinced she would never right herself,” Bascom writes. Fortunately, the ship recovered and safely delivered the troops to England.

Many ships that have been lost without a trace are probably the victims of rogue waves, which might have sunk them so quickly that no one was able to radio for help.

In describing and forecasting waves, oceanographers talk about “significant” wave height. This is the average height of the highest one-third of the waves in an area.

Fortunately, both for those who venture out to sea and those along the coasts of the world, huge waves are rare. Storms in the Southern Ocean often create the world’s highest waves, because storms there are strong and there is no land between the tip of South America and Antarctica to dampen winds and stop waves.

Since waves lose very little energy as they travel in water that’s deeper than one-half their wavelength, most swells eventually run into shallow water and begin changing into the breakers that give surfers their rides, but also erode beaches.

Swells in the open sea can be 2,000 feet/610 m long. Such a swell will begin to “feel” the bottom of the ocean when it moves into water about 1,000 feet/305 m deep. Here, friction will begin slowing the wave, decreasing the wavelength and increasing the height. When the wave is about a foot high for each foot long, it begins to break to form surf.

Depending on the slope of the beach, breakers can either be plunging, which surfers prefer, or spilling breakers. Breakers, unlike deep-water waves, do transport water, which is why they carry surfboarders and body surfers toward the shore and knock down shore divers who aren’t paying attention.

After a day of diving in the ocean below the motion of waves, getting a close-up view of a small part of the sea, you could enjoy dinner or a walk near the ocean. This is a good way to connect with the ocean on a large scale as you watch waves roll in, grow higher and crash into breakers that push water up on the beach. You can contemplate the world the waves have moved through in the many miles they have traveled since the wind first created them.