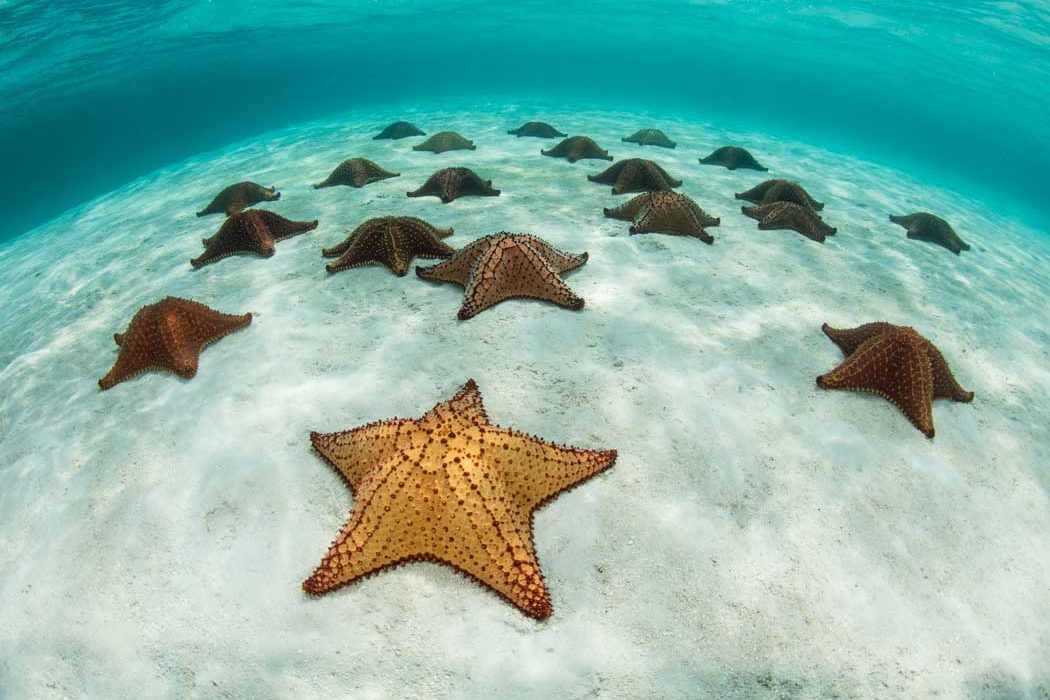 As school-age kids, long before we even thought of becoming scuba divers, almost all of us had some awareness about the marine creatures known as sea stars. Our knowledge came from nursery rhymes, poems, stories about walks along the seashore, and if you were lucky, from personal encounters when you explored tide pools or vacationed at a beach. Sea stars are the jewels of many tide pools and a highlight of many beach excursions. Either near the beach or as part of an undersea scene, sea stars have become one of the enduring images of the marine environment.

In many respects, sea stars appear to be simple animals, the kind of organism we often classify as a “lower life form,” but no matter how laymen or scientists describe them, there is little doubt that anytime we see a sea star, it tends to command our attention.

Sea stars occur in a variety of shapes, sizes and colors. Some species are small enough that you can easily place more than one specimen in the palm of your hand. Others are so large that you cannot touch your hands if you attempt to encircle a single specimen with your arms. Most have five “arms,” but others, known as sun stars, have as many as 24. Some sea stars display brilliant colors while others are dull and nondescript. Many are multicolored and mottled, but others appear in a single hue. At least the part we normally see, the dorsal surface, appears as one color.

Worldwide there are about 1,500 known species of sea stars, and sighting one or more species on a dive is quite common in many oceans around the globe. Occurring only in saltwater environments, most sea stars inhabit the sea floor in temperate and tropical seas where they play important roles as both scavengers and predators. Of the sea stars found in tropical seas, the majority occurs in Indo-Pacific waters, but a number of species do occur in the Atlantic, Caribbean and associated seas.

Along with their close cousins the crinoids, brittle stars, basket stars, sea cucumbers, sea urchins and sand dollars, sea stars are described in the phylum Echinodermata (the echinoderms). The word “echinoderm” is derived from the Greek words “echinos,” meaning spiny, and “derma,” meaning skin, and the skin of most echinoderms is covered with spines or wartlike projections and bumps. But despite its rugged appearance, the skin of most species is surprisingly delicate and easy to injure. Filled with thousands of nerves, the sensitive skin protects the animal and surrounds the internal skeleton.

Other prominent echinoderm characteristics include bodies that display five-part radial symmetry and distinct organ systems, including tube feet. The five-part symmetry is readily apparent in adult sea stars and brittle stars, and though present, this pentamerous symmetry is less obvious in sea urchins, sea cucumbers, sand dollars and basket stars. However, in their larval stage, sea stars display bilateral symmetry with their left and right sides mirroring each another.

All echinoderms, including sea stars, lack an organ that is considered a brain, and many scientists gleefully describe echinoderms as the most advanced of the brainless invertebrates. Their nervous system is composed of a number of simple rings of nerves without any “central command headquarter.” But despite this design, echinoderms are capable of many surprisingly complex response patterns.

The feature that distinguishes echinoderms from all other animals is the presence of a hydraulic system known as the hydrovascular, or ambulacral, system. This water-governed system is used in locomotion and for capturing food. In essence, the hydrovascular system is a set of internal pipes and valves that use seawater to extend and contract structures commonly called tube feet that assist the sea stars as they move about the sea floor in a slow but purposeful manner, and when they grab potential prey.

When sea stars walk or crawl across the sea floor, the seawater that is pumped through the hydrovascular system is used to inflate some of their tube feet (podia), thus causing the feet to extend. The ends of the tube feet have suckers that attach to whatever the sea star is walking on or grabbing, and the tube feet hold tight as specialized muscles contract to help pull the animal forward. This cycle is repeated as the sea star traverses across the sea floor. 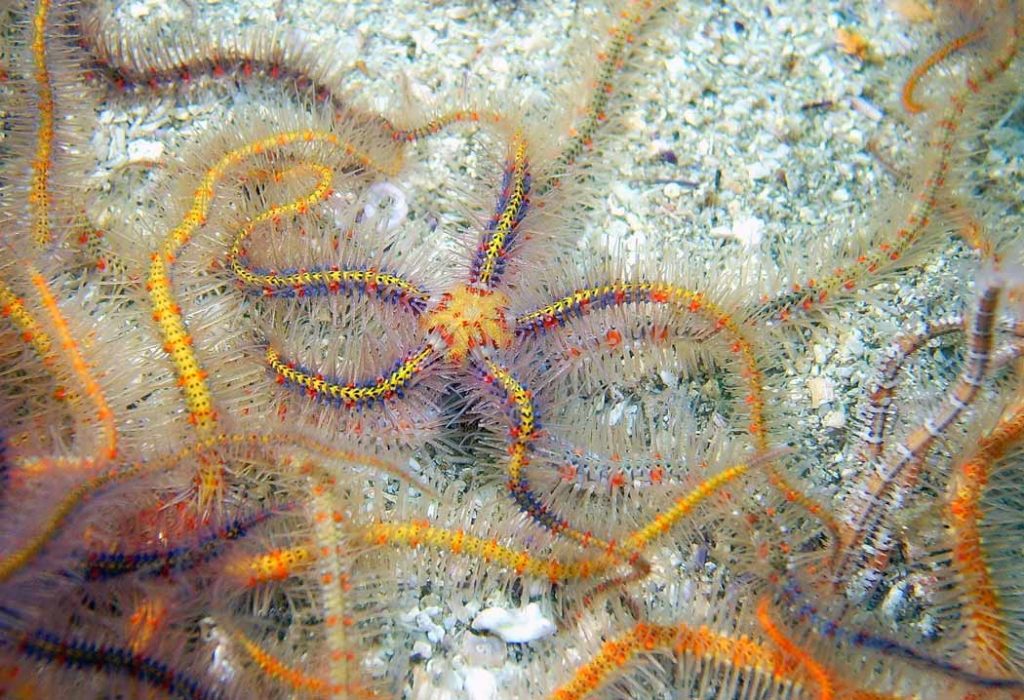 Long known as starfish, “sea star” in recent years has become the more widely accepted term. It is used to describe the echinoderms described in the class Asteroidea to avoid any suggestion that these invertebrates are types of fishes. The arms of sea stars are thick and prominent, a characteristic that sets them apart from brittle stars, their echinoderm cousins. Neatly arranged rows of tube feet can be found on the underside of each arm. The mouth of a sea star is on the underside of the central disc, the center portion of the body from which the arms radiate outward.

Sea stars are light-sensitive with some species being drawn to light while others are repelled. So it is sometimes said by the punsters that in a clever twist of nature, the sea has eyes in its stars, a little play on words that has helped me remember that some sea stars might be quick to retreat if I shine a dive light on them, while others might become easier to photograph.

The upper surface of the bodies of many sea stars has numerous spines. One of the better examples of this feature is provided by the coral-eating species known as the crown of thorns, a common name given in obvious reference to those spines. In addition, many other species are equipped with modified spinelike structures called “pedicellariae” that look like miniature pincers. These structures are used in defense to grab animals that touch, and thus threaten a species that is equipped with these pincerlike structures. In some species the pedicellariae are greatly modified and form miniature jawslike structures with recurved fanglike projections. These sea stars use their pedicellariae to catch small fishes and other prey items. Once captured, the prey is passed by the pedicellariae to the mouth on the underside of the central disc in a coordinated fashion.

Sea stars are key predators in many reef communities. They feed on a variety of prey items including barnacles, snails, sea urchins, brittle stars, corals, sponges, clams, mussels, fishes, other sea stars, and other creatures and their eggs. Many species also readily feed on a variety of dead and dying creatures.

Sea stars capture prey in a variety of ways. In fact, it is sometimes said that the diversity in their diet and in the methods used to capture prey appears to be limited only by the number of researchers studying these varied creatures. While some sea stars have the amazing ability to extrude their stomachs to capture and digest prey (see sidebar), other species such as the blood stars described in the genus Henricia sit on the bottom with their arms raised off the substrate and secrete mucus strands from the grooves between the rows of tube feet. After a short period, they use their tube feet to gather in the mucus and any planktonic creatures that the mucus has entrapped. Still other sea stars such as the Caribbean species known as the Reticulated Sea Star (Oreaster reticulatus) prey predominantly on a variety of sponges.

In sea stars, the sexes are separate, but males and females look the same to both laymen and scientists. Spawning is usually achieved by releasing sperm and eggs into the water column where sexual union occurs. The resulting larvae spend anywhere from a few days to several weeks as plankton before settling down to live their adult lives on the sea floor.

As you now know, there is a lot more to sea stars than just the colors and shapes that usually grab our attention upon a first sighting. Their natural history is fascinating, and gaining insight into their lives is guaranteed to provide you with a better understanding of life in the world’s oceans.

Making a Whole From a Part

One of the more remarkable traits found in sea stars is their legendary ability to regenerate lost body parts. In fact, it is often said that a single discarded arm can regenerate the remainder of its missing body. Like a lot of sea lore, this claim has some basis in fact, but there is a lot of variability in terms of regenerative powers. Most sea stars are likely to die from infection or predation before they can regenerate missing parts; however, it is true that many species possess amazing regenerative powers. Injured sea stars have been documented to regrow nearly perfect arms that have been lost.

This regenerative ability plays an important role in the survival strategy of some sea stars, as they seem quick to sacrifice body parts to escape predation.

The Coral Eating Crown Of Thorns

The crown of thorns sea star (Acanthaster planci) is one of the larger and more widely known of all sea stars. The skin on their dorsal surface is covered by hundreds of sharp, venomous spines. The crown of thorns gained its notoriety because it feeds on the tissues of living corals, and over the years invasions from this species have denuded many popular diving and snorkeling reefs of living corals, including large areas of Australia’s Great Barrier Reef. Some specialists believe the invasions are part of the natural cycles of nature, while others fear that the invasions are in part due to imbalances in nature created by humankind.