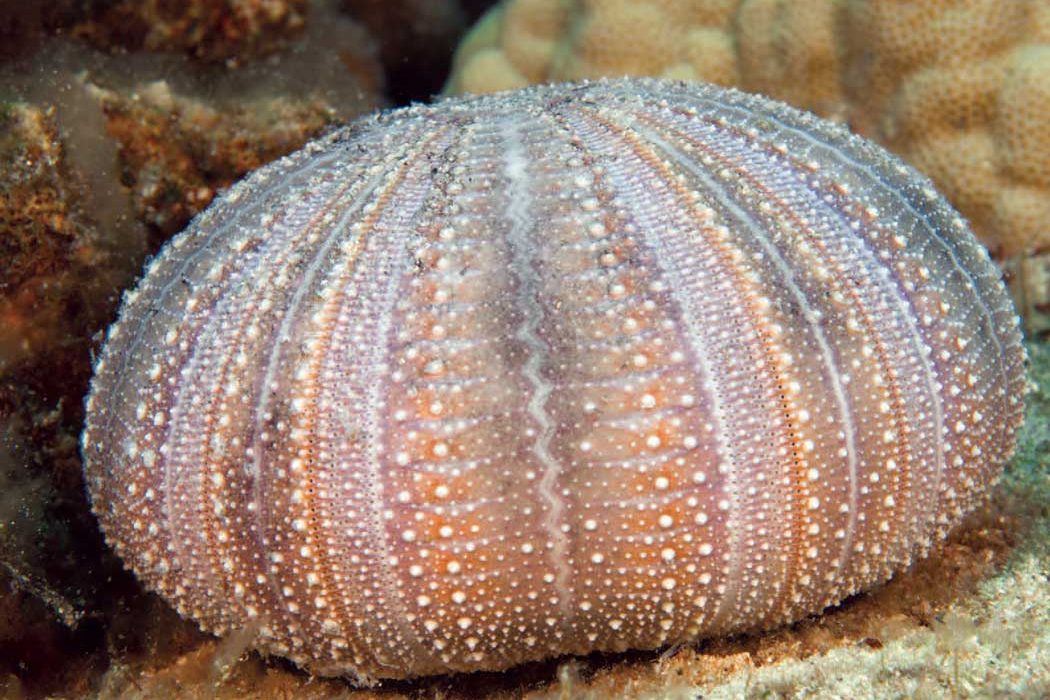 Anyone who has experienced the business end of sea urchin spines is not likely to forget their misfortune anytime soon. For the unfamiliar, it is well worth noting that the spines can easily puncture and become embedded in the skin of an unfortunate diver. And they hurt!

But there is another side to the sea urchin story, one that shares their natural history, value to the ecosystems where they occur, and their importance to a number of creatures that depend on them for food, shelter and protection. While you might not fall in love with sea urchins after you read the rest of this piece, if you make the effort to consider how these occasional nuisances fit into Mother Ocean’s grand scheme, I think you will have a much greater appreciation for their existence and the roles they serve in the oceans we love to explore.

The animals we commonly refer to as various types of urchins are described in the phylum echinodermata. Additional members of this group of invertebrates include sea stars, brittle stars, sea cucumbers, basket stars, crinoids (aka feather stars) and sand dollars. The word echinodermata is derived from the Greek words “echinos,” meaning spiny, and “derma,” meaning skin. Thus, the phylum name is an obvious reference to the wartlike spines that cover the bodies of most echinoderm species.

Sea urchins as well as all other echinoderms are marine organisms that live on or close to the bottom. The combination of five-part radial symmetry (also known as pentaradial and pentamerous symmetry), distinct organ systems and the lack of a true brain are prominent shared traits that distinguish members of this phylum. While the five-part symmetry of most sea stars and brittle stars is often readily apparent, this body design is not immediately obvious in sea urchins, sea cucumbers, sand dollars, basket stars and feather stars. However, a cross-section view of these animals reveals their five-part symmetry.

Many echinoderms possess small tube feet that are used for mobility as well as transporting food particles to the mouth. The tube feet are part of a water vascular system that enables coordinated movement. When the water vascular system is being used, seawater is pumped through a series of internal body canals to inflate some of the tube feet. Suction cups that “grip” the seafloor when the tube feet inflate are attached to the ends of the feet. Specialized muscles in the walls of the feet contract to pull sea urchins and their relatives across the bottom. 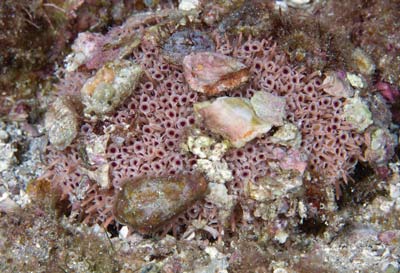 Flower Power
The urchin species commonly referred by the easily misconstrued name flower urchin is capable of inflicting extremely painful stings when touched with bare skin. Believed to be the most venomous sea urchin, the flower urchin is commonly seen in reef communities, sea grass beds and sandy biomes throughout the Indo-West Pacific. The species has short, blunt spines that are easily overlooked. Their numerous whitish to pinkish flowerlike, pedicellariae that cover the body are their most conspicuous feature. The pedicellariae also contain the venom. Flower urchins often cover much of their bodies with debris, including shells, rocks and coral fragments.
Photo by Marty Snyderman

Sea urchins are further classified as members of the class Echinoidea, a group that also contains sea cucumbers. Collectively, these animals make up one of five classes of echinoderms.

In addition to five-sided symmetry, the body of a sea urchin has a rigid spherical-shaped shell known as a test that is made of a series of close-fitting bony plates. The test can be seen when the spines and other tissue has been stripped away. Their potentially pain-inflicting spines are scattered over the surface of the test and small, pincer-like organs called pedicellariae, used for cleaning and defense, are present between the spines. Used in conjunction with the tube feet, the spines provide additional leverage to help sea urchins make their way across the substrate at a considerably faster speed than might be expected upon first consideration. Some species can easily outpace the sea stars that attempt to prey upon them.

The mouth of a sea urchin is located on the underside of the body. The anus is positioned at the opposite pole. Sea urchins possess a complicated chewing apparatus known as “Aristotle’s lantern” that is composed of five teeth. This mechanism consists of five converging jaws and accessory bony plates.

Sea urchins are primarily nocturnal creatures, although they are opportunistic feeders and will readily take advantage of daytime feeding opportunities. Collectively speaking, sea urchins are omnivores. Some primarily graze on algae or sea grass. Others feed chiefly on encrusting animals such as sponges and bryozoans, and some feed on detritus and waste from other animals. And many are quick to prey upon a variety of invertebrates, including other echinoderms, sponges, polychaete worms, bryozoans, tunicates and mussels. A variety of species known as heart urchins lack jaws, and they burrow into sand or mud in search of their food.

Members of many sea urchin species routinely spend their days wedged under rocky ledges or crevices. Others group together in exposed portions of the reef. Grouping is a defensive behavior designed to help individuals protect themselves from predation. 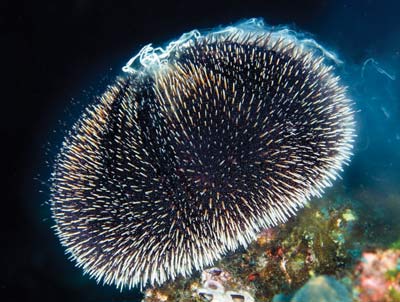 In most sea urchin species, eggs and sperm are simultaneously released into the water column, where sexual union occurs. Photo by Marty Snyderman

While sea urchins lack eyes, they are sensitive to light. This allows them to move their spines to defend themselves when they detect a shadow that might be cast by a predator.

Specialists that want to help the lay community gain an understanding of sea urchins sometimes describe them as hollow shells because their internal organs occupy very little space. The hollowness allows for the expansion of their gonads during the breeding season when the body cavity of sea urchins is packed with eggs or sperm. The nutritious gonads are one of the main reasons sea urchins are so attractive to some predatory fishes.

Sea urchins reproduce via external fertilization with males and females. In most species eggs and sperm are simultaneously released into the water column where sexual union occurs. The fertilized eggs experience a larval stage prior to undergoing their transformation to adulthood. In a relative handful of species fertilization occurs in the bodies of the females.

Sea urchins are important contributors to the ecology of many marine ecosystems. In coral reef communities the sea urchin story is one of balance and nuance. The fundamental facts are that algae and sea grasses are vital food sources for sea urchins as well as many herbivorous fishes and turtles. If urchin populations expand without natural checks, they can strip these communities of food other creatures depend on. But without sea urchins and other herbivorous animals, algae can overgrow and suffocate corals.

In healthy kelp forests, sea urchins primarily feed on the shed of kelp as blades of kelp continually drop from the fronds to the seafloor. When an urchin population increases beyond the supply of food provided by the shed, the urchins readily feed upon kelp holdfasts, living structures that anchor kelp to the seafloor. The holdfasts can quickly weaken to the point that fronds pull free from the bottom. The bottom line is that if urchin populations go unchecked, they can quickly decimate entire kelp forests.

Serving in another capacity, sea urchins serve as food for a variety of species. A partial list of beneficiaries includes sea otters, sea stars, shrimps, crabs, lobsters and bony fishes, including wolf eels and a variety of wrasses, pufferfishes, triggerfishes and damselfishes.

Staying clear of the spines while getting to the soft body tissues of urchins poses a considerable challenge to potential predators. Motivated predators often try to bump the urchins to dislodge the grip provided by the urchins’ tube feet so the hunters can turn them over and gain access to the urchins’ soft underside. But there can be a considerable price to pay for employing that technique, as those that attempt it often end up with a face full of urchin spines and puncture wounds. 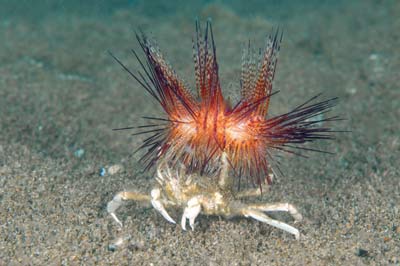 Some crabs place sea urchins on their backs, using the urchins for their own protection, while a number of fishes and shrimps hide among urchin spines, using them in similar fashion.
Photo by Marty Snyderman

Some crabs place sea urchins on their backs, using the urchins for their own protection, while several fishes and shrimps hide among urchin spines using them in similar fashion. Classic examples of fishes include juvenile leatherbass (Dermatolepis dermatolepis) that can commonly be seen hiding around the prominent spines of several species of long-spined urchins from Mexico’s Sea of Cortez to Ecuador’s Galapagos Islands and two species of urchin clingfish. Occurring over a wide swath of the Indo-West Pacific, the more commonly encountered long-snout urchin clingfish (as opposed to the New Zealand urchin clingfish) inhabits reef environments where a variety of long-spined sea urchins also occur.

The snouts of female long-snout urchin clingfish are longer than those of the males. Not surprisingly, the two sexes have different diets. Females feed on small bivalve mollusks that burrow into nearby corals and on the eggs of shrimps that live in association with the urchins. Males prefer to feed upon the tube feet of the urchins they associate with. That is not exactly a nice way to show appreciation for the protection the urchins provide!

Among the crustaceans that live in association with sea urchins, two species that have special status in the minds of many underwater photographers and that live in close association with the colorful fire urchin (Asthenosoma varium) are the Coleman shrimp (Periclimenes colemani) and zebra crab (Zebrida adamsii). Both species gain protection by surrounding themselves with the urchin’s venomous spines. Usually seen as adults in male/female pairs, Coleman shrimp live on their host’s body while feeding on parasites, algae and plankton. 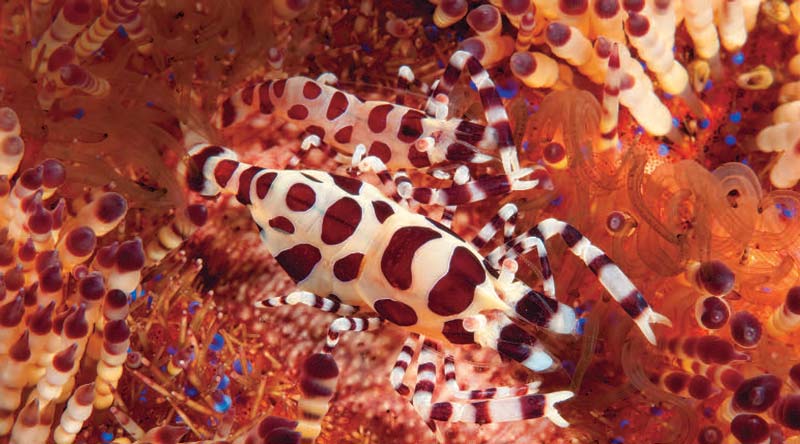 Usually seen as adults in male/female pairs, Coleman shrimp live on their host’s body while feeding on parasites, algae and plankton.
Photo by Marty Snyderman

Similarly, zebra crabs can often be found on fire urchins. These crabs use their hosts as places to perch so they can feed on plankton that drift in the water column.