There are some subjects I have photographed more times than I can recall, but I still find it impossible to pass them by when a new opportunity presents itself. There is always a better photograph to be made. 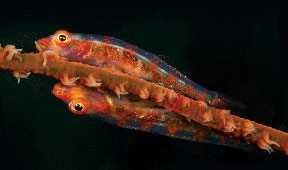 I suppose that is why I look closely at every whip coral I come across when I have my macro system in tow. There’s always a chance that I will find a whip coral goby (Bryaninops yongei) in a best-ever pose. And the only place this strikingly attractive fish occurs is in association with this species of soft coral (Cirripathes anguina), a species also known as wire coral.

In creating the accompanying image, I came across this whip coral at about 100 feet (30 m) on an overcast day in Yap during a dive in which my camera system was set up with a 100-mm macro lens. This lens is perfect for photographing relatively small creatures. This time, instead of finding one whip coral goby as I often do, I found this pair, and I instantly realized that I had an opportunity to make a photograph that is unlike any I already have.

When given a rare opportunity, there is always a tremendous temptation to rush right in and start shooting so the opportunity doesn’t get away from me. But experience has taught me to take a moment to think about the images I want to make and to look for any potential problems before I start blasting away.

In this case there was a slight current flowing parallel to the wall where the whip coral was attached. When working within inches of small subjects it is all too easy to accidentally get closer than I intend and spook my subject. Remembering some failures, I positioned myself on the downcurrent side of the whip coral so I could avoid getting pushed into my subject by the current.

I also considered the fact that the water behind the whip coral was a not particularly inviting shade of light green. Instead of properly exposing the unappealing water, I thought it wiser to close my aperture down to f-16 and create a more dramatic underexposed background of black water. I thought the blackness would help make the orange, red and yellow fish stand out in my shot.

In addition, by closing down my aperture I would increase my depth-of-field, thus giving me a much better chance of getting the entire body of both gobies in sharp focus.

Lastly, I reminded myself to compose my frame so that the gobies and the whip coral ran diagonally across my frame. I find the angular, diagonal orientation more appealing than one in which the fish and coral bisect the frame in a perfect horizontal or vertical direction.

Divers are taught to, “Stop. Think. Then Act.” when handling a problem underwater. This good advice can also be applied when composing a pleasing underwater photo.