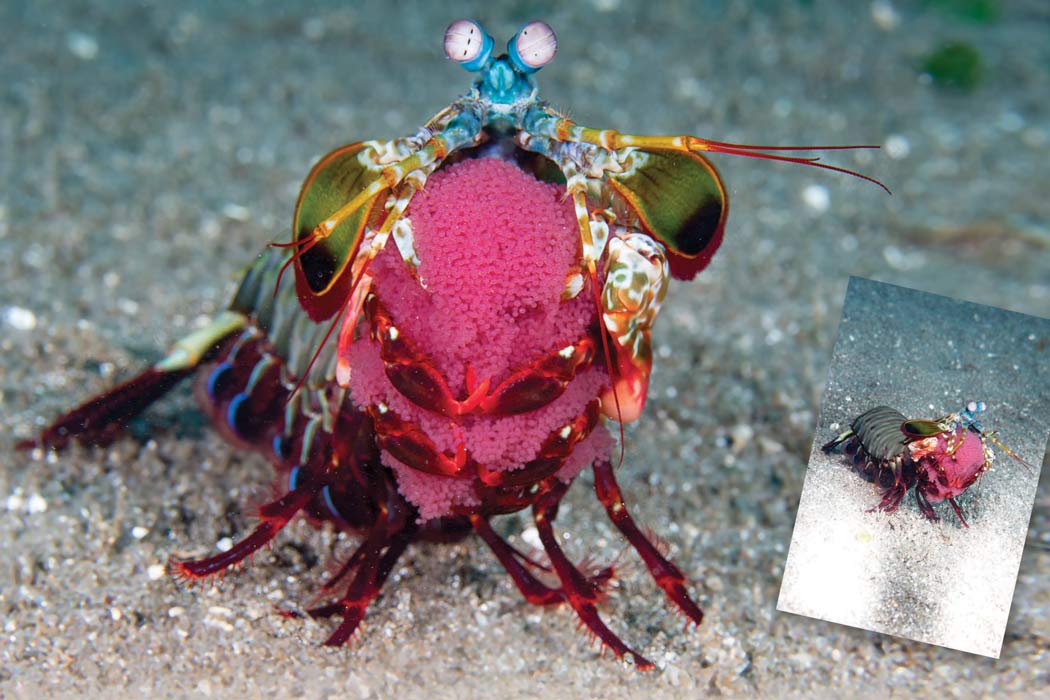 Wow! What a moment and what an opportunity.

Those are the thoughts that went through my head the instant I saw this female peacock mantis shrimp carrying her eggs as she made her way across the sand.

My next thought was to remember that I was working over a sand bottom and that I wanted to avoid creating the horribly distracting hotspots that are commonly seen in shots where the foreground is a bright sand bottom. An example of those hotspots can be seen in the inset photo. Those blown-out areas are a combination of two things: a highly reflective sand foreground and poorly aimed strobes.

When trying to fill a pleasing percentage of our images with relatively small creatures that live on or near the sea floor, we routinely work with camera-to-subject distances of three feet (0.9 m) or less. And to complicate matters, in an effort to create compelling images in this scenario, we often try to get our camera system very near the sea floor. This low orientation helps us reveal the faces and eyes of our subjects.

As a general rule, we are taught to position a strobe above and to the side of our lens, then to aim ahead and downward to illuminate our subjects. However, this technique can work against you when shooting over sand because your strobe will light the foreground (sand) and create a sandstorm of the dreaded hotspots.

The solution, as shown in the main photo here, is to aim my strobe(s) slightly upward so that the mantis shrimp and her clutch of eggs were lit by the lower portion of the beam instead of aiming my strobe at a hard downward angle, directly at my subject. When applying this technique, I suggest adjusting your strobe(s) before moving into position to compose your frame so that the movement does not cause your subject to flee.

With the “aim up” technique, you will light your subject with the lower part of the beam and avoid harshly lighting the foreground. Sandstorm successfully avoided.

Story and photo by Marty Snyderman
This article was originally printed in the July/August 2017 issue of Dive Training.