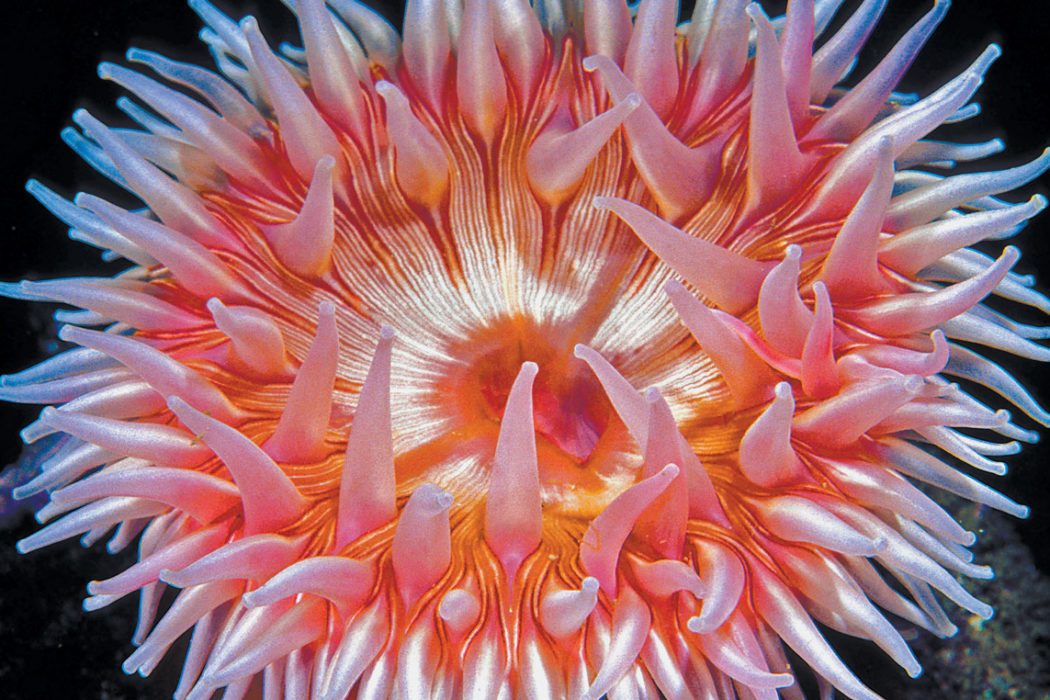 Amemone. Amenome. Aargh. Anemone. That’s it. “An M O Knee.” It’s a relatively simple yet tongue-twisty word, which describes more than 1,000 species of marine creatures found in temperate, subtropical and tropical seas around the world. Sea anemones occur in a variety of colors that vary from fire engine red to drab brown. Many species are both colorful and delicate-looking, and their long, thin tentacles often appear to flow back and forth in the surge and current like flowers being blown about by a gentle breeze. But do not let their looks belie their potent nature! Sea anemones are marine predators armed with potent stinging cells.

Members of the phylum Cnidaria (from the Greek for “nettle”), sea anemones are described in the class Anthozoa (“flowerlike”) as are their closest relatives the hard corals, soft corals and corallimorpharians. Other members of this phylum of invertebrates include jellyfishes, hydroids and sea wasps. Collectively, these organisms are generally considered the simplest of complex organisms.

All cnidarians are equipped with virulent stinging cells known as nematoblasts, or cnidae, hence the phylum name, and it is the possession of these stinging cells that distinguishes members of this phylum. The stinging cells are typically concentrated in the tentacles.

Anemones are found in coastal areas and on seamounts in oceans all around the world where many species attach to rocks, reefs, wrecks and whatever other submerged substrata that can be found. Other species, especially those that live in sandy biomes and rubble zones, live in self-made tubes.

Anemones occur in a variety of shapes, sizes and colors, and look somewhat like upside-down jellyfishes that are attached to the substrate. Their body plan consists of a ring of tentacles connected to the outer edge of a circular oral disc. The mouth is in the middle of the disc. Most anemones have a stalk that is attached to the oral disc on one end and a smooth muscular basal disc on the other. However, the stalk is often hidden from a diver’s view. The bodies and stalks of anemones are somewhat flexible, but ultimately these creatures depend on their stinging cells to capture food. While many people quickly conclude that anemones are attached to the substrate, they are actually capable of moving across the sea floor at a snail’s pace via their basal disc. In a race with snails, however, many anemones would come in a distant second.

A single body cavity serves as the stomach, respiratory organ and intestine. All food passes into the opening to this cavity on the way in as food and again on the way out when excreted as waste, thus the opening, known as the mouth, also serves as the anus.

While some anemones live in groups known as aggregations, others are solitary. They range in size from less than 0.5 inch (1.25 cm) in diameter to an astonishing 6 feet (1.8 m) across. Some aggregations are so densely concentrated that the tightly packed mat of animals obscures the reef, creating a carpetlike appearance, and you will often hear experienced divers refer to a carpet of anemones in areas along the west coast of North America where aggregations of anemones are common.

As is the case with most members of their phylum, sea anemones live their adult lives attached to the seafloor. Being attached presents a series of potentially serious problems. Capturing food, escaping predation and finding a mate would likely be logistical nightmares for many marine creatures if you took away their ability to swim, walk or crawl. Cnidarians have solved the first two potential problems because their stinging cells can immobilize a variety of prey and predators on contact. Studies have documented that it takes as little as 3 milliseconds for some cnidarians to fire their explosive stinging cells after an animal has come in contact with the cells or tentacles. This lightening-fast response time is thought to be one of the fastest cellular responses in the natural world.

The stinging cells, called nematoblasts or cnidoblasts, are equipped with structures known as nematocysts. Although nematocysts appear in a variety of basic designs, all bear some resemblance to a miniature harpoon. The nematocysts are always coiled and ready for use. When stimulated by physical contact, chemical detection or even a wave of increased water pressure caused by slight movement, the cnidoblasts explode, using water pressure to unleash the coiled nematocysts. Collectively, a number of nematocysts ensnare the intended victim and may release a deadly poison. The various poisons are quite fast-acting and can quickly paralyze prey. If the targeted animal becomes a victim, the enshrouding tentacles are then drawn in toward the anemone’s mouth where the prey is consumed. In other cases, predators are repelled, but not devoured.

Anemones are carnivores, with prey ranging from other invertebrates such as mussels and worms to a variety of fishes or almost any animal of suitable size. It should also be noted that some anemones survive by feeding upon minute organisms that drift into their tentacles. Sea anemones are preyed upon by relatively few animals, but some sea slugs and fishes include anemones in their diets. 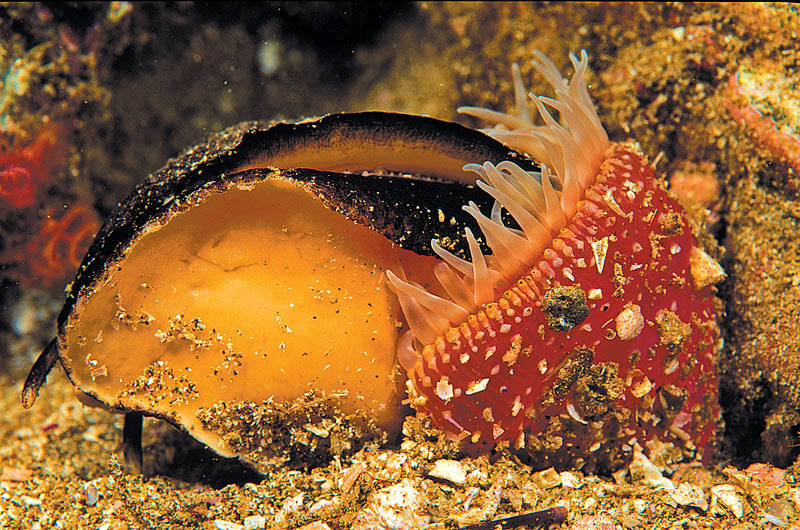 Anemones are carnivores with prey items ranging from other invertebrates such as mussels and worms to a variety of fishes or almost any animal of suitable size. The anemone pictured here is eating a mollusk known as a limpet. Photo by Marty Snyderman.

Finding a mate might also seem to be a perplexing issue for animals that are slow-moving or attached to the seafloor, as it would seem difficult, if not impossible, to get out and strut your stuff in order to woo the opposite sex. But Mother Nature has solved this dilemma. As is the case with other cnidarians, the same sea anemones reproduce both sexually and asexually.

When reproducing asexually an anemone reproduces a genetic replica of itself through a process known as budding. No sexual partner is needed. A single mature anemone pulls itself apart into what are essentially two halves. The result: An identical anemone sprouts from another anemone’s body. In other instances small parts of the pedal disc break off and regenerate into small anemones.

Animals that are created via asexual reproduction are genetically the same as their parents, and as a result any environmental factor such as a disease that threatens one, threatens all. However, cross-fertilization involving sperm and eggs from two adults produces populations of animals that are genetically dissimilar. Despite the energy expense required to find a mate and the considerable risks that are often involved, the resulting diversity plays an extremely important role in the ability of their species to stay one step ahead of ever-changing environmental factors in a seemingly cruel world that is sometimes described as “change, adapt or perish.”

While divers are likely to encounter many different species of anemones, several species have gained some notoriety among sport divers because of their stunning appearance and the fact that some anemones have become synonymous with various regions. For example, the snow-white species known as the white-plumed anemone (Metridium giganteum) is synonymous with great dive sites from Southern California north to western Canada. This species grows to 20 inches (50 cm) in height in California waters and considerably taller as one heads north. The fish-eating, or rose anemone (Urticina piscivora) is another favorite among California divers as is the white-spotted rose anemone (Urticina lofotensis), the painted anemone (Urticina crassicornis), the giant green anemone (Anthopleura xanthogrammica), another greenish species, the aggregated anemone (Anthopleura artemisia), and the proliferating anemone (Epiactis prolifera).

In Caribbean waters the giant Caribbean anemone (Condylactis gigantean), a species with an oral disc that commonly attains a diameter of 10 inches (25 cm) or more, and that is readily identifiable by both size and its often purple tentacle tips, is commonly encountered. Often home to Pedersen’s cleaning shrimp, the much smaller corkscrew anemone (Bartholomea annulata) is less obvious, but packs a sting that often results in a painful welt and rash.

Residing in sand biomes and rubble zones, tube anemones construct long, mucus-lined tunnels that they retract into when inactive, disturbed or threatened. The tubes are laced with stinging cells strategically deposited by the anemones for their own defense. When feeding, these anemones extend two rings of tentacles into the water column as they reach out beyond the opening of the tube.

As you probably know, fishes called anemonefishes (in some cases as clownfishes) live among the stinging tentacles of some Indo-Pacific sea anemones even though the tentacles can quickly paralyze and kill other fishes that come into contact with them. Many anemonefishes display eye-catching colors and their antics can entertain for hours on end as they quickly appear, disappear, dart about and squirm and wiggle among the tentacles.

Of course, as one enjoys the show it is only natural to wonder about the relationship between the host anemones and the fishes. Clearly, the fishes gain protection from predatory fishes as the stings of anemones keeps the predators at bay. Whether and how the anemones might benefit remains unclear.

For many years specialists have struggled with the question of how anemonefishes are protected against the potent stings of the anemones. The most commonly accepted belief is that anemonefishes do not get stung because they have a protective agent in the mucus that coats their bodies. The mucus is acquired during an acclimatization period with the anemone. In essence, the anemonefishes become fishes in an anemones’ clothing, masking their presence from the anemone. A second theory suggests that the mucus coating lacks the component that stimulates anemones to fire their nematocysts. There is evidence to support both theories, and different factors might be in play with the various species of anemonefishes and their host anemones. 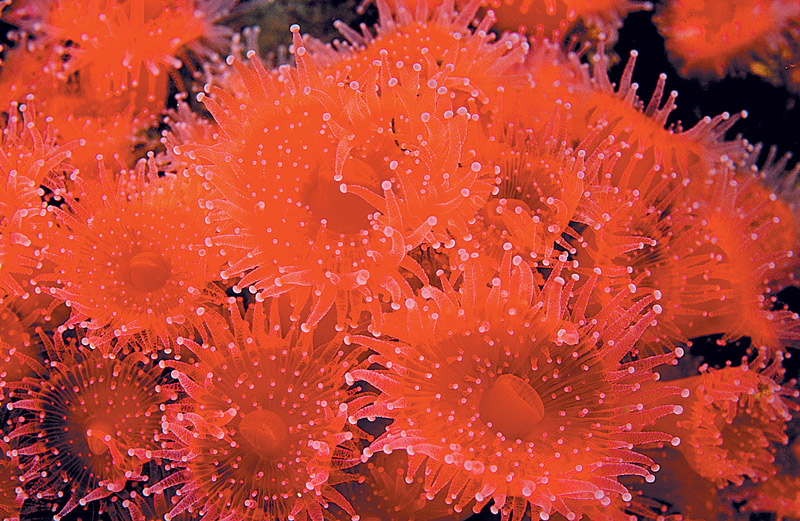 When a Cnidarian is Not an Anemone

In Caribbean waters, an organism called the orange ball anemone is a favorite find for many night divers. With orange stalks and semitranslucent tentacles that often have bright orange tips, these somewhat rare, walnut-sized cnidarians are a visual treat. However, despite their common name, these cnidarians are not anemones. As is the case with the cnidarians commonly called strawberry anemones along the west coast of North America, the orange ball “anemone” is more correctly called a corallimorpharian, an animal that is a very close cousin of anemones, but not an anemone. Corallimorphs have numerous, short, somewhat stubby tentacles that radiate out from the center of the oral disc instead of from the outer edge as is the case with anemones. In addition, the mouth of a corralimorph protrudes outward, while the mouth of an anemone tends to be low-lying and slitlike.

Strawberry “anemones” are also known by the names club-tipped anemone and corynactis anemone. Their genus name is Corynactis.

Algae Plays a Role in the Survival of Many Sea Anemones

Most sea anemones share a symbiotic relationship — mutualism — with the single-celled marine algae known as zooxanthellae. In mutualism both organisms benefit and neither is harmed. In this case the algae gain a place to live and the anemones receive food as a byproduct of the algae’s photosynthetic processes, with algae’s waste products becoming food for the anemones.