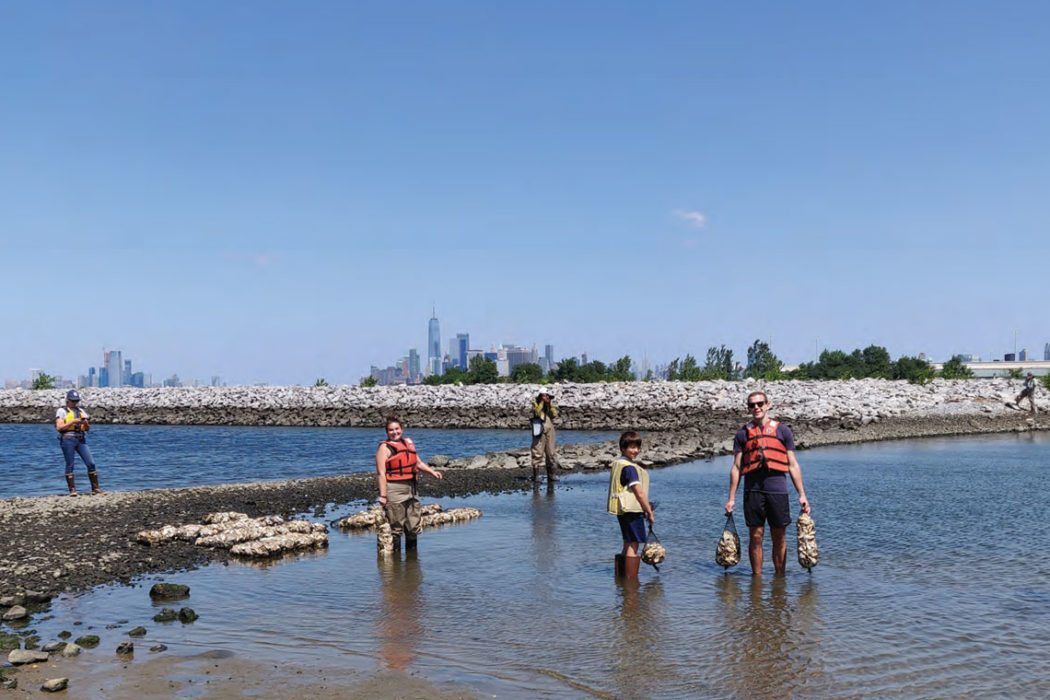 THE BILLION OYSTER PROJECT is a citizen science project coordinated by the New York Harbor School (NYHS) with the goal of restoring one billion live oysters to New York Harbor by 2035. The project aims to engage hundreds of thousands of school children in marine restoration-based STEM education programs. The project grew out of the activities of students at NYHS who started growing and restoring oysters in New York Harbor in 2008.

The project was inspired by the success of the Oyster Recovery Partnership based in Chesapeake Bay which has replanted well over 7 billion oysters on 2,200 acres of oyster reefs.

Oyster reefs are thought to have covered more than 220,000 acres of the Hudson River estuary and filtered water, provided habitat for other marine species and attenuated wave energy but are now functionally extinct in the Harbor due to over-harvesting, dredging and pollution.

The project was formally established in 2014 and was the brainchild of educators Murray Fisher and Peter Malinowski, who are both associated with New York Harbor School and its Foundation.

How does the group begin to plant a billion live oysters? It begins with the collection of discarded oyster shells from over 70 restaurants throughout New York City. Billion Oyster Project’s partner, The Lobster Place, collects and delivers all those shells to Governors Island where the sun “cures” them for at least a year to rid them of any contaminants. A final cleaning and the shells are then moved to the Urban Assembly New York Harbor School (a public high school on Governors Island that offers technical and vocational training in the marine sciences) hatchery. At the hatchery, student-grown oysters produce larvae that, in a week or two, grow a “foot” to allow it to attach to a substrate. Those collected and “cured” oyster shells serve as the substrate for that anchoring. The attachment process is critical to the development of the larvae and each shell can hold up to 20 new live oysters. Not all the larvae survive but the goal is for at least five new oysters per shell. When the water is warm, the oyster clusters are moved to a cage or shellfish bag that ultimately develops into a reef structure.

That’s when the oyster’s job starts. Each oyster can filter up to 50 gallons of water a day and the reefs form shelter and provide food for other marine creatures. Not only do those oysters’ reefs provide habitat to increase biodiversity, they also form breakwaters that potentially can protect a coastline against a hurricane’s waves. The New York Governor’s Office of Storm Recovery has partnered with Billion Oyster Project to install oysters on its $74 million Living Breakwaters Project, which aims to reduce and reverse erosion and damage from storm waves, improve the ecosystem health of Raritan Bay and encourage environmentally conscious stewardship of nearshore waters.

Restaurants are able to recycle those used oyster shells for free — increasing their bottom line and keeping the shells out of landfills. Over 1,000,000 pounds of oyster shells have been returned to the harbor.

Students are learning aquaculture and reef restoration with the hands-on curriculum. 6,000+ local students have participated in the program.

Community understanding and support of the importance of protecting the harbor waters from further degradation. More than 9,000 volunteers have helped in the hands-on restoration work.

Three floating oyster hubs active (structures that allow the school to utilize urban spaces such as piers, marinas and basins for growing oysters).

Oysters help to clarify the water and remove some pollutants, including nitrogen. Excessive nitrogen triggers algal blooms that deplete the water of oxygen and create “dead zones.”

Oyster reefs can reduce the effect of large waves, reduce flooding and prevent erosion along shorelines.

The Billion Oyster Project still has a way to go. Currently, slightly less than 29 million oysters have been planted.

To find out how you can support or participate this project, visit billionoysterproject.org. With all of our help and the students, citizens, businesses and government of New York, this project is going to produce a genuine pearl of great value.