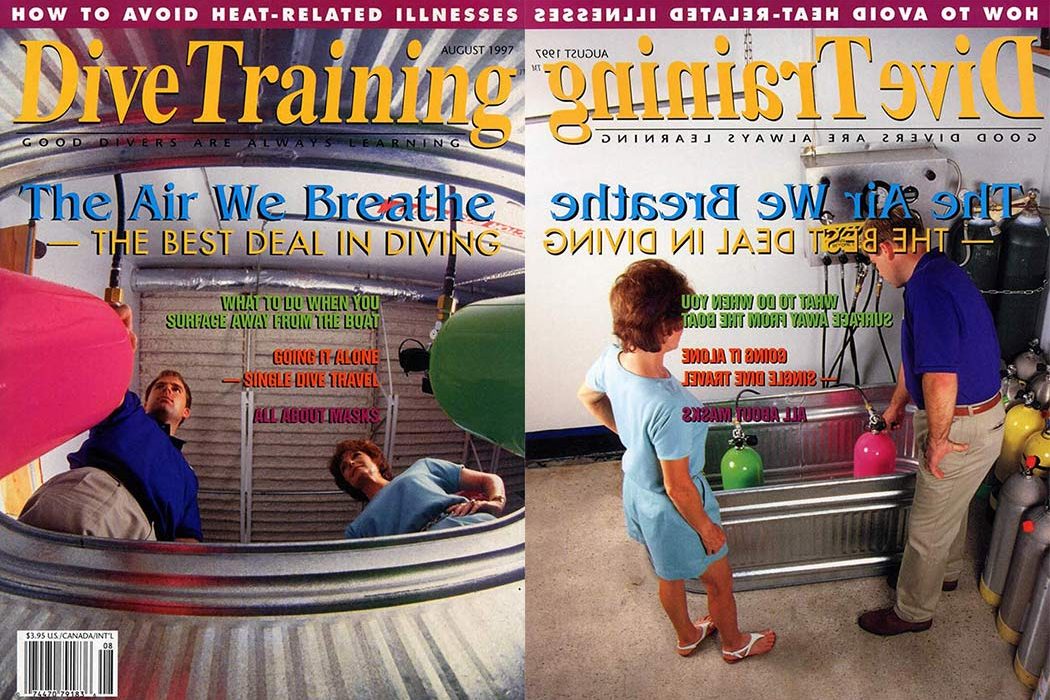 In late spring of 1997, our underwater photography club had photos on display at a local dive shop. My wife was representing our club one afternoon when a man inquired about the photos on display. He expressed an interest in talking to me about possibly photographing a project for a scuba magazine. Well, as fortune would have it, the man happened to be Jerry Beaty, associate publisher of Dive Training Magazine. Ruthie called me saying that a man named Jerry Beaty wanted to talk to me about shooting some pictures for a scuba magazine. In disbelief, I asked her if she was serious. After all, she knew that one of my greatest desires was to have just one picture published in a scuba magazine. Little did I know at that time that her conversation with Jerry would start us on a 19+ year career of working with Dive Training Magazine, making great new friends and traveling to many beautiful locations.

Jerry became familiar with my name because of my active participation in underwater photography contests, so he thought he might give me a chance to shoot what became our first cover! As it turns out, it was Jerry’s first cover as well. Since the possibility of having a photograph in a dive magazine would fulfill my long-time ambition, I gave Jerry a call. He explained the premise of the magazine and the idea of the reverse covers. He explained that a reverse cover symbolizes that there are always two ways to look at everything, so don’t trap yourself into believing yours is the only view.

Of course, I told Jerry that Ruth and I would be more than happy, actually excited, to try out his idea for the reverse cover. Jerry set up a conference call with Mark Young, the publisher of Dive Training. After a brief discussion of their goals and quizzing me on possible techniques and ideas, we decided upon a plan of action.

The concept was to create a reverse cover of someone filling a tank at an air station. The photo was to be shot from above, looking down and from beneath the container looking up through the water. Jerry was able to locate a watering trough (like for horses) and had a square hole cut in the bottom of the trough. I purchased a large piece of Plexiglas and sealed the clear bottom onto the trough with silicone sealant. We contacted Jeff Simpson of Ocean’s Window Dive Shop nearby in Plano, Texas and told him what we wanted to do. He said, “Come on down, the pool area is yours for the day.”

We mounted the watering trough on cinderblocks so I could crawl under the tank to photograph scuba tanks being filled. With the tanks carefully positioned in the trough, we began filling it with water. All was going as planned until the weight of the tanks and the water started to warp the bottom of the trough, causing the seal to break around the Plexiglas. Now for the big problem! Water started leaking on me as I lay beneath the trough. I began to panic over the possibility of losing my precious camera. Typical of photographers, damage to the camera was my main concern. Later, I realized that it could have been worse. I could have received quite a shock by lying in water with studio power supplies placed around the trough. Since this was 1997, digital was not an option so everything was shot on slide film with studio strobes, 20 ft. PC cords and light stands. To get the shot we needed, and I was determined to get the perfect shot, I had to crawl under the tanks with the water leaking all around the Plexiglas. My trusty SLR camera was wrapped in a zip lock bag for protection. Seeing me there, all wet and sweaty with my camera in a zip lock bag must have been a sight to behold as I noticed several store employees chuckling over my dilemma.

At the time, I had no idea what I was getting on film, so I shot two rolls of images from under the tanks with Ruth and the divemaster putting air into the tanks. Then I climbed a rickety 10 foot ladder to shoot two more rolls of film for the reverse, which was shot from above. We took the film to the lab to be developed that day. We decided that we needed to reshoot all the shots from above so we went back a second time, set up the scene again and corrected our mistakes.

As anyone who has been to an indoor pool knows, it is quite warm and humid. It must have been 95° F in the pool room. With water dripping all over me and the stress of trying to keep my camera dry it was definitely a challenging day! After all of the trouble and hassles we encountered by filling the tank with water, we realized that the clear, shallow water was so transparent no one could even tell there was water in the tank. The tanks could have been in a dry trough and photographed without all the mess, water and stress. Isn’t hindsight great!

At the time I did not realize it, but that stressful day yielded one of our favorite covers. We have done 76 covers for Dive Training since. For Ruth and me, the shoot was the beginning of a new life of adventure, fun and friends with Dive Training Magazine. We have had the privilege of joining a family that works together to produce a top-notch product of which we are all very proud.

BACK TO ANNIVERSARY MAIN PAGE >>