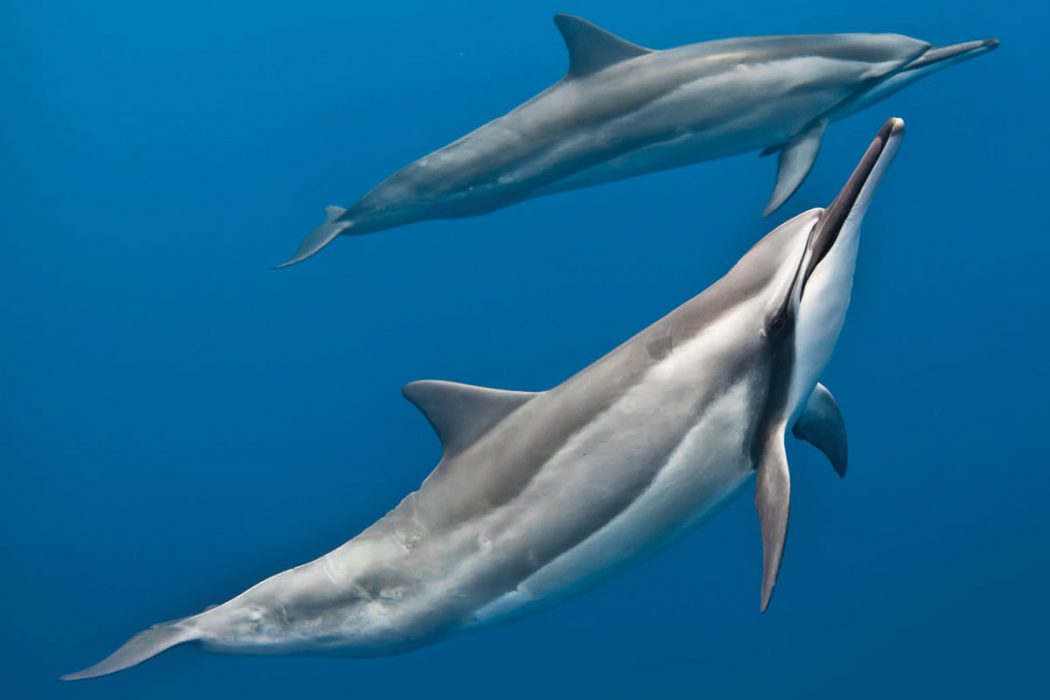 APPROXIMATELY 2.2 MILLION SPECIES inhabit the worlds’ oceans, but fewer than 90 are cetaceans. When considered collectively, cetaceans have mastered the art of living in the sea in ways we can only dream of, as can be validated by the following examples. The blue whale is the largest animal to have ever lived on Earth. A fully-grown adult can attain the astonishing proportions of 100 feet (30 m) in length while weighing as much as 300,000 pounds (136,077 kg). Air breathers, animals that must rise to the surface to breathe, many cetaceans can hold their breath for as long as 90 minutes, and some can hold their breath longer than two hours. Sperm whales are able to dive as deep as 7,000 feet (2,133 m). While the fastest human swimmers reach a top speed of just over five miles an hour in short spurts, some cetaceans have been clocked at close to thirty-five miles an hour (56.3 kmph).

Derived from the Latin, cetus meaning whale, with the Latin having its roots in the Greek word ketos meaning “any large fish” or “sea monster,” the word Cetacea is the name of the order that describes all of the marine mammals laypeople commonly think of as whales, dolphins and porpoises. Cetaceans are warm-blooded air-breathers that bear live young. In addition, they nurse their young and their bodies have traces of hair or fur. With the exceptions of four species of freshwater dolphins and one porpoise, modern-day cetaceans live all, or the vast majority of, their lives in saltwater.

You might have noticed that there is no suborder described by taxonomists that uses the words whale, dolphin or porpoise. While these words are universally accepted by laypeople, taxonomists do not use them. 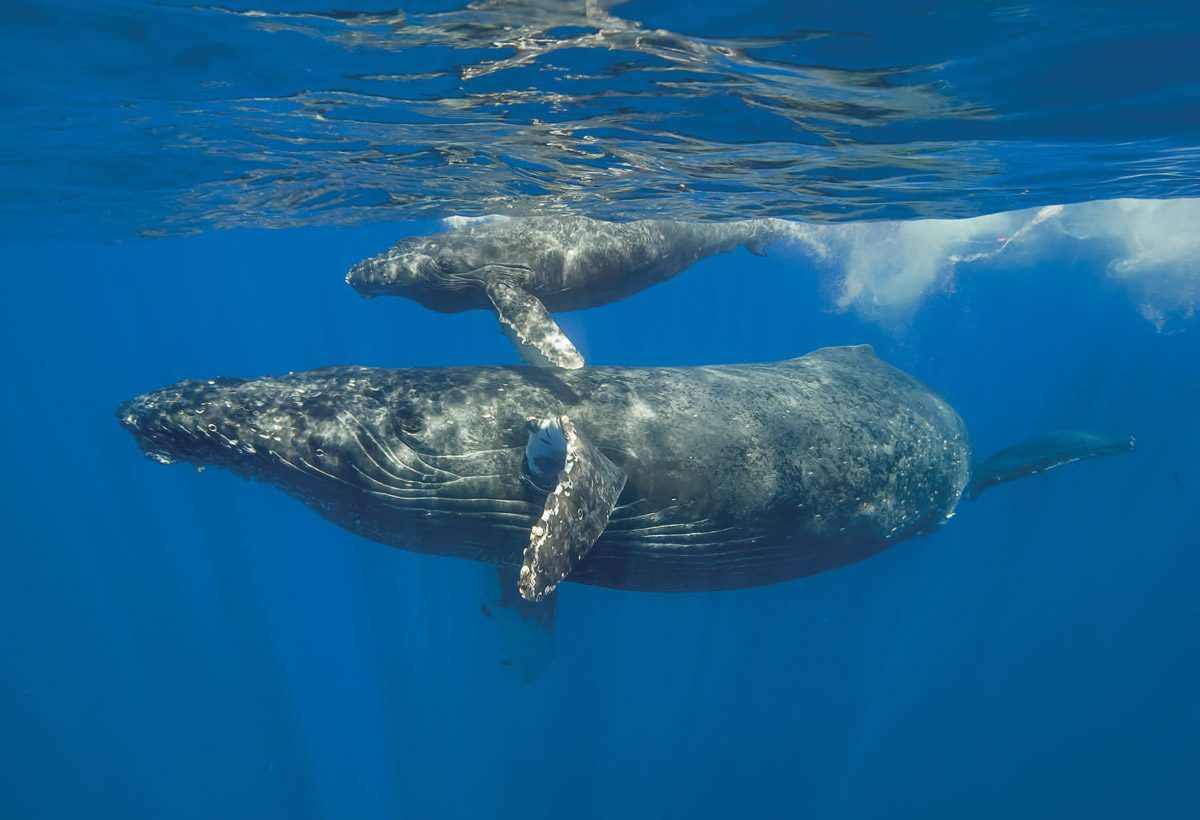 The bond between a mother and calf is especially strong during the early years of life in many species of cetaceans including the humpback whale mother and calf pictured here. Photo by Marty Snyderman.

The following are three examples of how the use of the word “whale” can lead to confusion in the lay world.

All three species are classified by taxonomists as members of a family included in the suborder within Odontoceti. That family is named Delphinidae and this taxonomic group also includes many species that laypeople commonly refer to as dolphins. Examples include the spinner, common, bottlenose and Atlantic spotted dolphins. As seen by these examples, some cetaceans commonly called whales and some called dolphins, are described in the same family.

Laypeople typically use the word whale in the names of physically larger animals and the words dolphins and porpoises in the names of smaller animals. But size is not a trait specialists use to distinguish between these cetaceans.

As a matter of further clarification, there are approximately 32 species laypeople refer to as marine dolphins and five freshwater river dolphins worldwide. There are only six species referred to as types of porpoises. A highly threatened species known only in China’s Yangtze River, the finless porpoise (Neophocaena phocaenoides) is the only freshwater porpoise.

The animals laypeople typically refer to as types of porpoises are described in the family Phocoenidae, a family in the suborder Odontoceti, the group laypeople know as the toothed whales.

In the remainder of this article I will use lay terminology where possible. 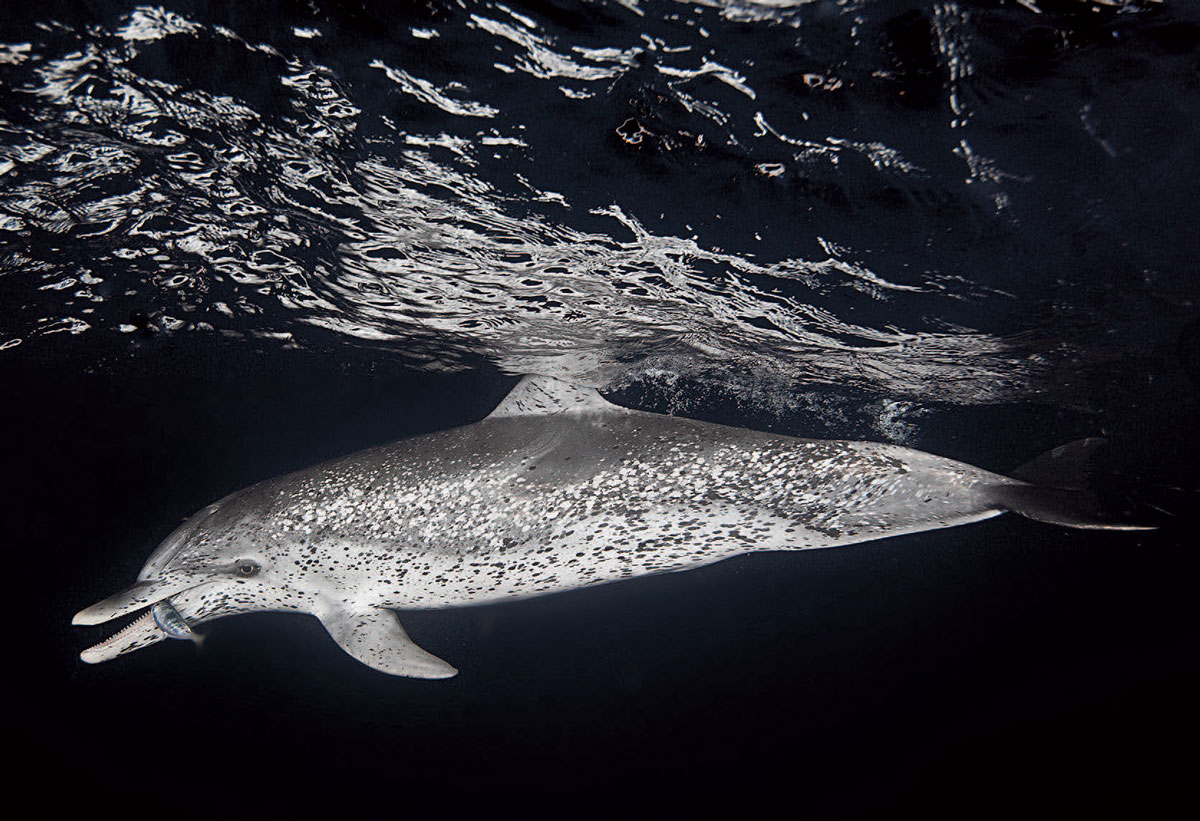 The teeth of toothed whales, a family that includes the Atlantic spotted dolphin pictured here, are used for grabbing and holding onto prey, not for chewing. Photo by Marty Snyderman.

Fossil evidence indicates that the ancestors of modern-day cetaceans probably lived on land some 50 million years ago. Their evolution from land mammals to sea mammals was likely a response to the fact that new food sources became available in the sea and life in the sea provided a way to escape terrestrial predators.

Over the eons front legs were modified into flippers. Unnecessary back legs were lost. Tails grew to much larger sizes compared to the overall size of their bodies, became wider and formed flukes. These cetaceans also grew and maintained a thick layer of fat known as blubber to keep them warm.

As aquatic animals, they grew more elongated skulls and their nostrils moved from the front of their face to the top of their head creating the openings known as blowholes. As more time passed, cetaceans adapted in ways that allowed them to dive with the ability to avoid the bends while simultaneously being able to store more oxygen in their blood and muscles than land mammals can.

By a significant majority, most cetaceans are types of toothed whales. As the common name “toothed whales” suggests, these whales are equipped with teeth. Collectively speaking, they are smaller and swim faster than baleen whales. A partial list of this family of approximately 73 species includes the sperm, killer, false killer, pilot, narwhal, melon-headed and beaked whales along with all species known as dolphins and porpoises. Collectively speaking, toothed whales inhabit a wide variety of aquatic ecosystems ranging from rivers near the equator to polar seas.

The teeth of most toothed whales are strong and conical shaped. The teeth are used for grabbing and holding onto prey, not for chewing. The varied shapes of the jaws and teeth suggests specialization for certain prey items in order to reduce competition.

One of the more fascinating adaptations found in toothed whales is their use of a form of natural sonar called echolocation. It is used in navigation, hunting, investigating and learning about their surroundings. When echolocating, an animal emits intense low frequency sound waves produced in the nasal passages in the forehead. The melon, a large and fatty structure in the head, is used to amplify and aim the sound waves into the water column. The sound waves bounce off an object and return as echoes that are received by an oil-filled channel in the lower jaw and conducted to the middle ear. The whale’s brain interprets the data in a manner that allows the animal to determine the size, position, distance and direction of movement, if any, of the object.

The ability to echolocate plays a huge role in enabling toothed whales to successfully hunt in deep, dark and dirty water. No species of baleen whales is known to echolocate.

Some dolphins also emit series of high frequency whistles, squeaks and clicks to communicate with other members of their species. Most specialists believe controlled air movements in nasal passages produce these sounds but this remains unconfirmed. 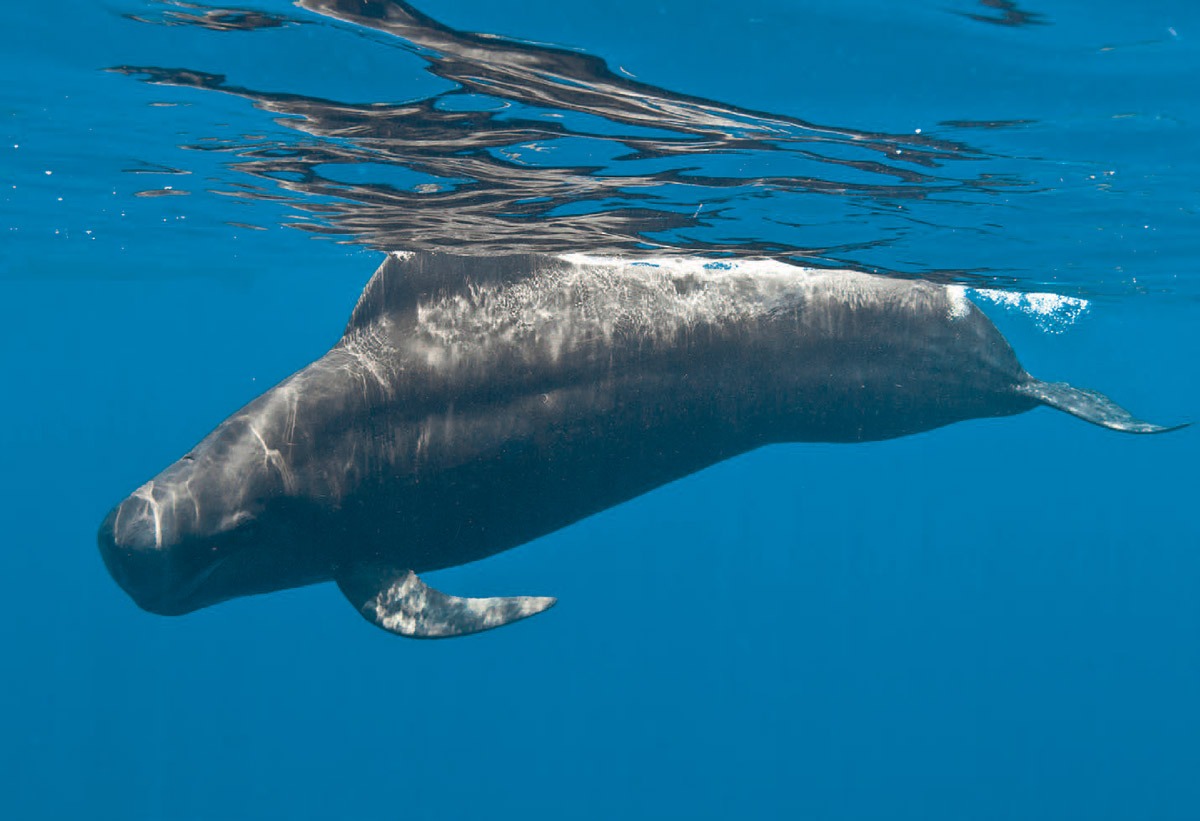 One of the more fascinating adaptations found in the shortfin pilot whale, pictured here, and other toothed whales is their use of a form of natural sonar called echolocation. Photo by Marty Snyderman.

The species commonly called the blue, humpback, fin, sei, minke, California gray, bowhead and southern right, are among the 11 to 14 species of filter-feeding, or baleen, whales that roam the world’s oceans. Specialists debate the number of species.

Filter-feeding whales are characterized by the possession of numerous comb-like baleen plates that are used to filter enormous quantities of some of the sea’s smallest organisms from the water when the whales feed. These strainer-like structures are comprised of stiff hairs made of keratin, a substance found in fingernails and hair of humans. The tightly packed plates hang from the roof of the mouth. The size, number and color of plates vary by species. Baleen whales feed primarily in sub-polar and/or polar waters.

Their relatively large heads, mouths and bodies and two blowholes are additional features that can be used to identify an animal as a filter-feeding whale. Toothed cetaceans have a single blowhole. Female baleen whales tend to grow larger than their male counterparts.

Baleen whales consume enormous quantities of zooplankton, crustaceans and small fishes and they are often categorized by their feeding method; gulping, skimming or bottom feeding. Gulping is used by the eight (or nine) species in family Balaenopteridae, a group known as rorquals or great whales. These whales are equipped with large throat pleats, external grooves below the mouth and throat, that look like the folds in an accordion. These folded layers of skin allow their throats to expand greatly when they feed.

A type of rorqual whale, the humpback, also uses another method of feeding, a cooperative hunting technique known as bubble netting. When bubble netting, intended prey are concentrated by a barrier of rising air bubbles exhaled by a single whale. When the prey becomes sufficiently concentrated, a number of other humpbacks swim upward, mouth agape, through the tightly packed prey. The whales are believed “to take turns creating the bubble net” so all of the whales get to feed.

The southern right whale and other skim-feeding baleen whales feed at or near the surface by swimming through swarms of zooplankton with their mouths opened wide.

Unique among the baleen whales, California gray whales are predominantly bottom feeders. They roll onto their side and suck in bottom sediment filled with small crustaceans. They use their large, powerful tongue to expel the water and sediment as they trap the crustaceans with their baleen.

For unknown reasons, the baleen whales that live in the southern oceans primarily feed on copepods and small shrimp-like crustaceans known as krill that typically occur at shallow depths. In addition to krill and copepods, those species that inhabit northern oceans feed on a much larger variety of prey including amphipods, squids and fishes. 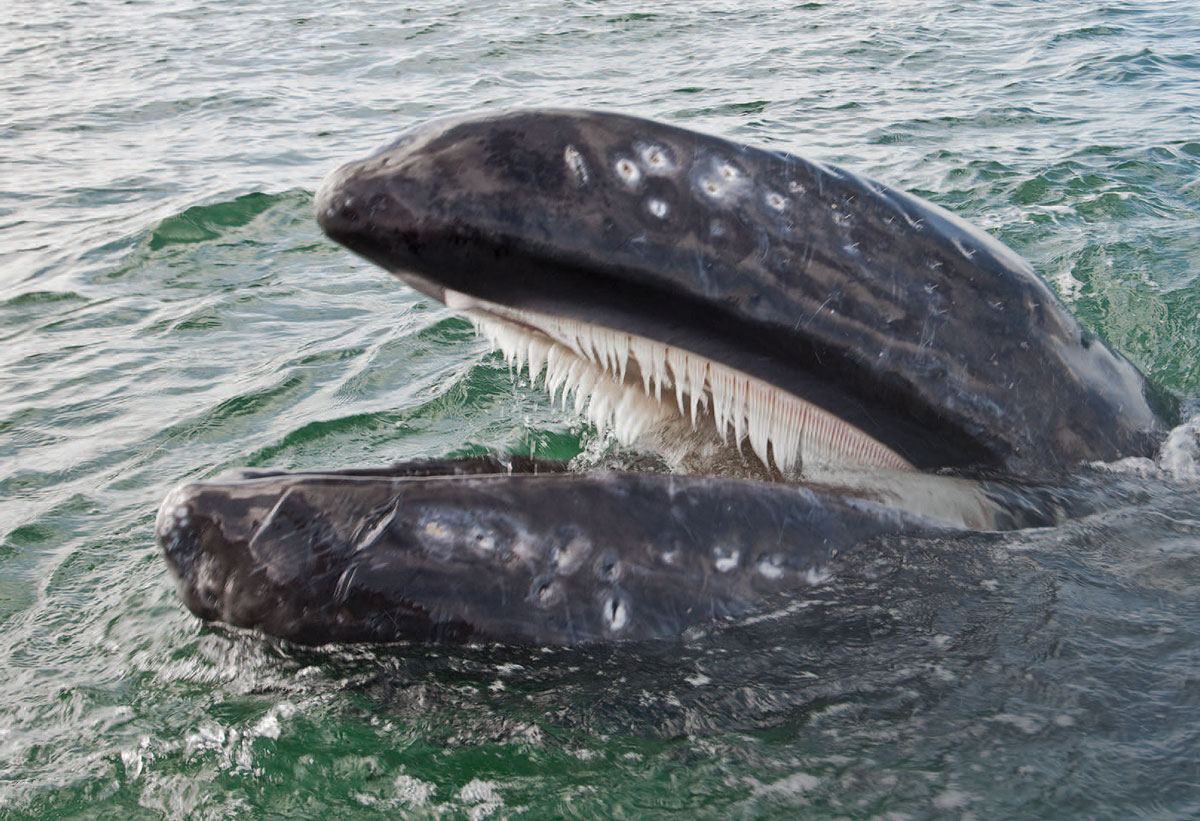 A few interesting facts about cetaceans