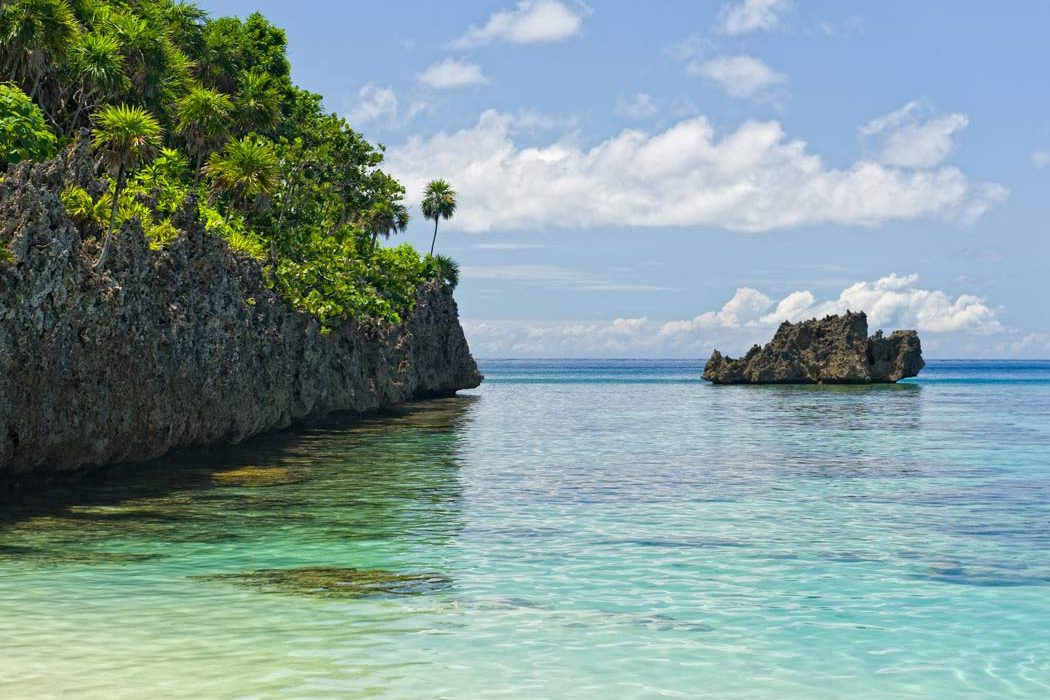 The moonlight shimmered off the ocean spray like sparks from the white horse’s galloping hooves, his mane flying wildly in the onshore breeze. He appeared at the edge of darkness and the night soon swallowed him up again as he sprinted by … or so it might have looked to the frantically barking Suzie, an island mutt. Suzie patrols the beach and is prone to breaking out in a fit of barking at imaginary rivals – especially after dark. The locals are sure she’s seeing duppies, or ghosts, and the night-running white horse has been “witnessed” by more than a few humans, too. Even as the new fiber-optic phone cable is placed in the ground much of Roatan remains deeply superstitious. It can be difficult to get native folks to work at some locations on the island due to regional legends. While I am not particularly prone to hocus-pocus, I do find it interesting that both my wife’s and my dive watch flooded at nearly the same time for no apparent reason while diving a popular site known as Spooky Channel. Hmm. 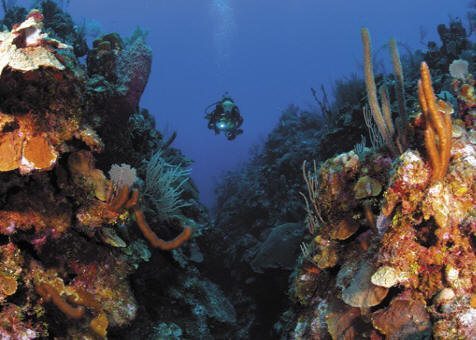 Roatan, Utila, and Guanaja are three of the biggest and most populated islands out of more than 60 that make up the Bay Islands of Honduras in the Caribbean. Looking at a map of the Western Caribbean you’ll see them tucked in on the bottom of a large “L” created by the Yucatan peninsula, Belize, Guatemala, and Honduras. With Utila starting at just 18 miles (29 km) off the Honduran coast, the Bay Islands are actually the exposed peaks of the Bonacca undersea ridge that lies southeast of the Belize Barrier Reef. Roatan and Guanaja have mountainous formations while Utila, the smallest of the three, lies relatively flat. Lush vegetation rules on all the islands. The subsea topography consists of spur-and-groove coral formations, tunnels, caves, and sheer walls, many of which start less than a football field in length from shore.

Roatan is the largest at just more than 30 miles (48 km) long and close to two and a half miles wide at its broadest. It’s also the most populated with nearly 20,000 inhabitants, a commercial harbor, and an international airport. Guanaja, at nearly 21 square miles (55 sq km) and sparsely populated has most of its 6,000 people living in one offshore settlement. Tourism is primarily limited to a few resorts – which could be reason alone to visit. We hope to explore Guanaja on our next visit to Honduras. Utila, though only about 16 square miles (42 sq km) in size, has a very large and active dive culture. Even though they’re less than an hour and a half by boat from the mainland, the Bay Islands have a distinctly different flavor from their mainland cousin Honduras and from each other. Like many locations in the Caribbean, these islands have a very colorful history, with the colonial powers of yesteryear constantly squabbling over them. Because of this rich background the native peoples today hail from Spanish conquistadors, English pirates, African slaves, Indians, Americans, and many others.

While the Mayans were reaching their zenith around A.D. 400, Indians from the mainland founded small subsistence villages throughout the Bay Islands. It appears that they traded with people still living on the coast of what is now Honduras.

Europeans most likely first stumbled on these islands during Christopher Columbus’s last voyage to the New World in 1502. His crew went ashore on Guanaja and named it the “Isle of Pines.” Some reports show that just a few years later the Spanish governor of Cuba made a slave-raiding run to the Bay Islands and the exploitation began.

For the next two centuries, the Bay Islands became a focal point for pirates and battles between the Spanish and English for control of the trade routes in the area. The islands had plenty of fresh water, wood for ship repair, and foodstuffs to resupply empty ships stores. In 1798 black Caribs (known as Garifuna) from what is now the Virgin Islands were forcibly removed by the English and deposited on Roatan. They founded the village of Punta Gorda, which is still populated by descendants of these people. In the early to mid-1800s, after slavery was abolished in the Caribbean, significant numbers of Cayman Islanders came to live on Roatan and set up businesses. Migration hasn’t slowed down, with hundreds of Americans, Europeans, and mainland Hondurans coming ashore every year to seek new opportunities. 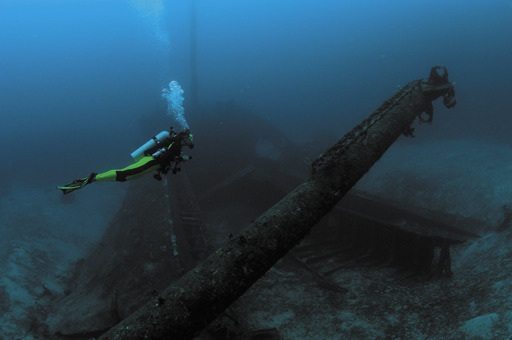 Divers who are “in the know” have been visiting Honduras for more than two decades now, yet it still retains the raw beauty of an uncut gem. This precious quality has become scarce in many areas of the Caribbean.

Many of the sites are within a 20-minute boat ride of the resorts with both moored and drift diving on the menu. Most operations have ample shore diving, too, and the selection of sites will suit divers of any experience level. The geology of the islands has formed a varied underwater topography that contains many swim-throughs, caves and walls, providing an enjoyable visual diversity.

After landing on Roatan from a Los Angeles red-eye flight, we made our first dive off the “front porch” of a dive resort, the well-known site called Spooky Channel. I tend to be leery of phrases like “world class” or “diving’s best” because they’re often overused and less than accurate. However, I was pleasantly surprised, as Spooky provided a series of exciting dives. The channel is quite a bit larger than it appears from topside and full of cuts, chimneys, tunnels and caves. Everything from large schools of baitfish to eagle rays routinely cruise the 97-foot-deep (29-m-deep) gulch. Visibility is often considerably less than the 100-foot-plus (30-m-plus) often enjoyed along the wall. Some of the channel’s deeper reaches sport dark crevices that are a bit, well, spooky. Supposedly strange events can occur, like disappearing cave entrances and gear snafus. I don’t know about the magical caves but we’ve got two flooded watches to attest to the latter.

To the southwest of Spooky sit Gibson Bight and Fish Den. Both offer a multitude of reef cuts with a robust covering of soft corals and considerable numbers of fish. At times it seemed like poking around in an aquarium. A particularly fun encounter occurred at Fish Den, when divemaster Calderon rounded a small coral head and came face to face with several foot-long squids. The curious mollusks remained in position and peered back at us with surprisingly intelligent eyes. Over time they slowly began alternating their color across a range of shimmering blues and greens.

A four-minute boat ride out of Anthony’s Key Resort rests the remains of the 230-foot-long (70-m-long) concrete carrier El Aguila. She was sent to the bottom intact in 1997 as an artificial reef and has been collecting marine life since. Now the ship looks like a bona fide maritime disaster by the time hurricane Mitch got through with her in October 1998. The stern bridge area is almost lying on its starboard side and the entire midsection is flattened and broken into small alcoves. The bow is upright on the sand at around 100 feet (30 m). Many rays and a few large grouper visit the steel reef as well as one big green permanent resident moray. After the bottom time ends, the standard profile is to swim back up the reef front and do an extended safety stop over a beautiful unscathed portion of spur-and-groove reef. 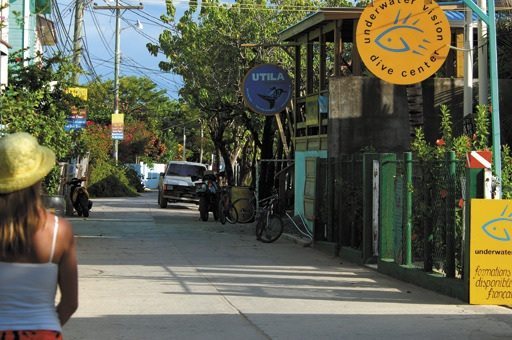 A 20-minute flight southwest from Roatan is the small island of Utila that has a different feeling topside from its bigger neighbor. Roatan’s dive operators are largely spread out but most of Utila’s are all within a few minutes walk of each other. Since there’s essentially only a single-lane road connecting one end of the island to the other it isn’t surprising. Utila has and still does cater to the “backpack” crowd. These are mostly young people from North America and Europe traveling on a very strict budget who end up taking a lot of diving classes. Bare-bones room rentals can be had for just a few bucks per night. For those who’ve matured beyond backpack mode, there are also a number of all-inclusive resorts to choose from.

Utila has gained worldwide recognition as a whale shark magnet. During calm wind-free periods, typically in February and March, the mammoth filter feeders can be spied from the surface and divers can be dropped near them. The wind had kicked up during our brief stay but we certainly heard more than a few stories around the bar about “El Grande.” We had to content ourselves with flourishing reefs, warm sunshine, and verdant islands. Not surprisingly, the underwater topography of Utila is very similar to Roatan. Steeper walls tend toward the north end and shallower sandy reefs to the south. Both offer great diving with lots of critters to check out. Soft corals dominate and the reefs are quite fishy compared with what much of the Caribbean looks like. The overharvested big fish like groupers are supposedly making a comeback now that there is more “official” protection.

When the nitrogen clock says its time to vent some gas, there are several surface pursuits to check out. Simply hopping into a rental vehicle and cruising around often gets you acquainted with a destination. Just make sure to learn some of the basic road rules and have a decent map to follow. It’s easy to see Utila by walking or you can rent a bicycle. But beware; if you need a dedicated bike lane to feel safe, leave the two wheels behind as the street is very narrow and there’s plenty of “traffic” to contend with. Along the waterfront you’ll find small stores, cozy restaurants and of course purveyors of distilled spirits to quench one’s thirst. Hiking around is somewhat limiting due to the swamps and impassable jungle but a trip to Pumpkin Hill will present nice views of the entire island.

On Roatan, the topside attraction menu consists of horseback riding, dolphin encounters, both a bird and butterfly park, botanical gardens, an iguana farm, and even a jungle canopy cable ride. Taking a short walk along the road may expose you to the famous Monkey-La-La. It’s a most enchanting lizard that runs upright on its back legs. Be advised, it’s also a very delicious drink that packs a powerful punch.

The Honduran government is making a commitment to promoting tourism. They have created a “tourist police” called the Balam (Mayan word for jaguar). Their primary job is to ensure the safety of foreign visitors. More U.S. airline companies are now making direct flights to Roatan from gateway cities in North America. Several cruise ship companies have or will expand their itineraries to include Bay Island visitation as well. So it might be a good time to sample what the Bay Islands have to offer before all the “duppies” are chased away.