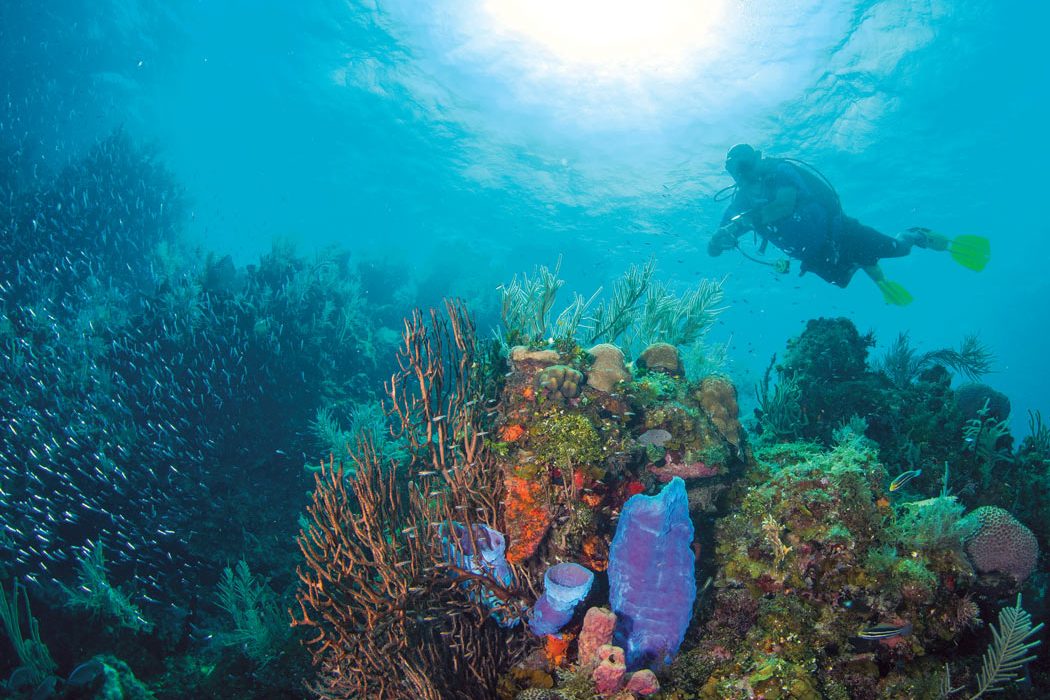 It seems like we’d barely taken off from Miami before it was time for “seats and tray tables in their upright position.” As I peeked out the airplane window I could see we were descending toward a cluster of lush green islands dotting the Caribbean Sea — ringed with fringing reefs just crying out to be explored. Guanaja and the Bay Islands of Honduras are only a two-hour flight from Miami, Florida. But whether viewed from high in the sky or from beneath the surface, they’re a world apart from other Caribbean destinations.

I must admit that as a diver and underwater photographer I’ve heard good things about this place for years, but I couldn’t pinpoint the Bay Islands of Honduras on a map until after I looked them up on Wikipedia — which was after I’d been invited to visit one of them. A small island named Guanaja (Gwah NAH ha). I’m glad I had the good sense to say yes to the trip before I was even certain where I was traveling. Sometimes leap, then look, works out. And with a bit of Internet research, I hit the ground with at least basic knowledge of the beautiful Bay Islands.

Guanaja’s reefs are a healthy mix of hard and soft corals. Photo by Lois Hatcher.

A Sense of Place

The Bay Islands of Honduras are a tropical Central American paradise situated just off the northern coast of mainland Honduras in the Caribbean Sea. Honduras is south and east of Belize and shares borders with Guatemala, El Salvador and Nicaragua. Eight Honduran islands and 53 small cays and islets are scattered from 10 miles (15 km) to 40 miles (60 km) offshore of the mainland. The three largest islands, Roatan, Utila and Guanaja are popular with Caribbean dive travelers. My first visit here — and yes, I do intend to return for more exploring — was to the island of Guanaja, which is the focus of this article.

Guanaja is second to Roatan in size. Guanaja is 43 miles (70 km) from the mainland and just 7.5 miles (12 km) from Roatan. Its hilly terrain includes the highest elevation of the Bay Islands, a spot that reaches 1,148 feet (350 m) above sea level. 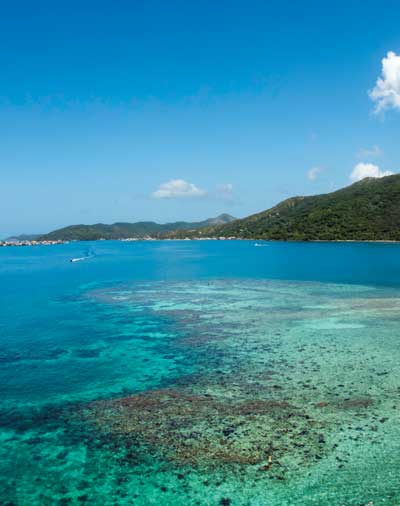 Guanaja isn’t as well known as Roatan or Utila, but I have a feeling that’s about to change. The extensive coral reef here is part of the Mesoamerican Barrier Reef system, second in size only to Australia’s Great Barrier Reef. The water is warm and clear and the reefs I visited are in excellent condition. And the local hotels and dive operators are keen to show off their island gem.

The island is ringed with a mix of sandy beaches, dense mangrove “forests” and dramatic bluffs offering stunning sea views. Fresh water is abundant here, which supports tropical fruit trees including mango, banana and coconut palm. A hike to the island’s north side offers a breathtaking view where you can see a picturesque waterfall.

One of the first things you will notice is that there are few cars here. This is because there are few roads, too. Water taxis are the main mode of transportation and for just a few dollars you can travel between the three main settlements, Bonacca Town (also called Low Cay or just “the Cay”), Savannah Bight and Mangrove Bight.

One of the next things you’ll likely notice is the vibe. The locals here are friendly and welcoming. This is partly their nature but it might also be due, in part, to their commitment to recover from damage suffered as a result of Hurricane Mitch, which in 1998 severely damaged the island’s infrastructure. Rather than giving up, enterprising Guanajans turned a tragic situation into a forward-thinking plan to rebuild with an emphasis on “green” construction practices that employ the use of solar- and wind-generated power, reducing waste and recycling. In fact, the local mayor, Spurgeon Miller, boasts that local businesses are supporting a “green” initiative aimed at using 100 percent solar and wind power within the next five years. Their goal includes making Guanaja’s carbon footprint the smallest in Honduras — and the entire Caribbean.

The Greening of Guanaja

Guanaja has already eliminated single-use plastics from over 70 percent of the island’s businesses, bars and restaurants. Eliminating plastic use altogether and replacing those items with recyclable paper products is in the works. School children meet after classes and walk the beaches picking up plastic and bottles that are then cleaned and sent to recycling plants.

Guanaja has over 26 freshwater streams. Use of chemical pesticides is being phased out, with only approved natural pesticides allowed for use after 2018.

A scuba and environmental education program is currently being developed that will offer Open Water Diver certification to local students, so they can better understand and appreciate their island’s rich natural resources.

Guanaja’s culture has long been linked to the ocean, with fishing, shrimping and lobstering as the primary source of income. Bonacca’s largest employer is a lobster processor that supplies Red Lobster’s USA locations with its fresh catch.

Fishing industry stakeholders understand the importance of fishing to the local economy and are taking steps to protect the region’s marine resources. Today, 20 percent of Guanaja’s waters are designated marine protected areas (MPAs) that are off limits to commercial fishing. The goal is to manage and ultimately increase these MPAs over time, to protect the industry from collapse due to overfishing.

English is widely spoken and knowing a little bit of Spanish goes a long way, too. U.S. dollars are widely accepted, which also adds to the ease of vacationing here. 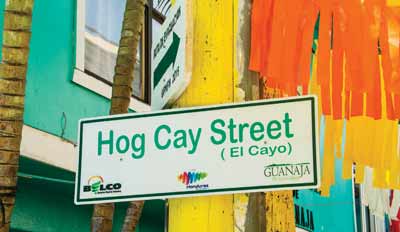 A Bit of History

Like so many Caribbean nations, Christopher Columbus gets credit for “discovering” Guanaja during his forth and final voyage. The date was July 30, 1502. Playa Soldado (Soldier Beach) probably doesn’t look much different now than it did during that historic landing more than five centuries ago. There is a new public dock and one roof pops out of the thick foliage a few hundred yards down the beach but those are the only apparent signs of development.

Back then it was inhabited by Payan Indians. As time went on settlers arrived, many from the Cayman Islands. The last names Bodden, Merren, Ebanks and Hyde are widely known in Guanaja and the Cayman Islands, where I have lived for many years. The two island nations have a lot in common.

The main settlement of Bonacca is comprised of two cays, Low and Hog. The cays have been built up over the years and are densely populated. Yet with waterways and small boats replacing streets and cars, the human population hardly seems to make an impact. At the end of almost every road is a stunning view of blue water and lush tropical greenery. 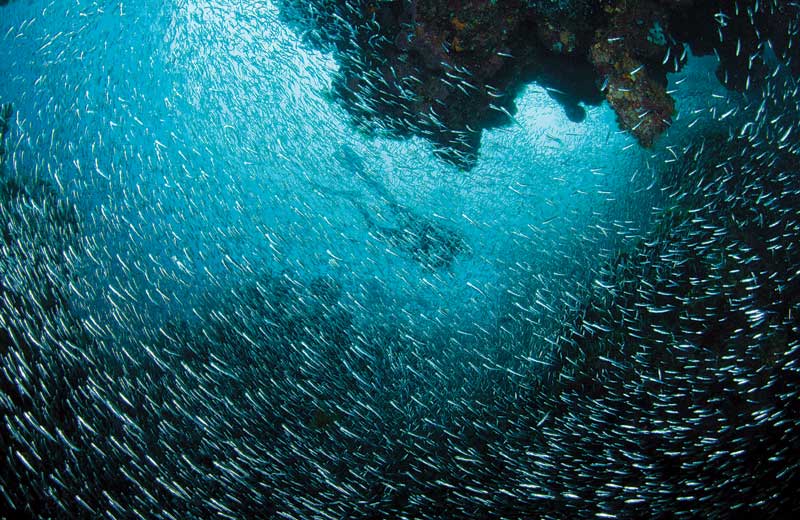 One of Guanaja’s mesmerizing dive sites. Photo by Lois Hatcher.

And Then There’s the Diving in Guanaja

I came to Guanaja to dive and I was richly rewarded. With over 50 named sites and more being discovered daily, this destination is suitable for divers of all skill levels. Because reefs ring the island, there’s always a calm leeward dive site waiting to be explored. Boat rides average 20 minutes and shore diving is also available. Some sites start in as little as 15 feet (5 m), with walls plunging to beyond sport diving depths.

Chris Columbus might have discovered the islands, but I’m told that a fellow named Homer Hickam is credited with mapping Guanaja’s dive sites in the early 1970s. Many sites are named after people — Diane, Daniel, George and Lisa, for example. I never learned who they were but after diving these “named” sites I can assure you these people are fortunate to have such spectacular dive sites bearing their names.

One site, Wonderful Reef, is home to a nurse shark named Jack Jack, who serves as the official greeter. After a visit with Jack Jack, we swam a short distance from the mooring ball to explore caverns and swim-throughs exploding with silversides.

The corals are relatively healthy and abundant, a pleasant surprise when there is so much news about coral die-offs in other areas of the Caribbean and Pacific. Pillar coral, elkhorn, lettuce coral and blade fire coral form thick patches in shallow water, giving marine life plenty of hiding spots. Larger creatures such as nurse sharks, green and hawksbill sea turtles and large morays are regulars at most sites. For macro photography enthusiasts, the little stuff is abundant here, too.

Wreck divers will be thrilled with one of the Caribbean’s best artificial reefs, the Jado Trader. The 240-foot (73-m) refrigerator freighter has been a dive site since 1987, so every surface is home to colorful marine life. Plans are in place to sink several more wrecks in the area. The first wreck, Sand Island II, is scheduled for sinking before the end of 2017. Organizers say several others will follow.

A $10 annual park fee is required of all divers. The usage fee funds environmental education, pays the salaries of two MPA patrol officers and provides subsidies to registered local fishermen to discourage poaching.

In March, 2016 Guanaja opened its first recompression chamber to treat suspected diving accidents. Dr. Matias Nochetto, Director of Medical Programs for Divers Alert Network (DAN), proposed the idea for a chamber to Guanaja’s Mayor, Spurgeon Miller, Villa on Dunbar Rock CEO and owner, Kirk Laney and operations manager, Mark Walker. The clinic was funded through a grant from DAN and contributions from Laney and Delia Cornett, whose late husband, Donald Cornett, was a business partner of Mr. Laney’s. 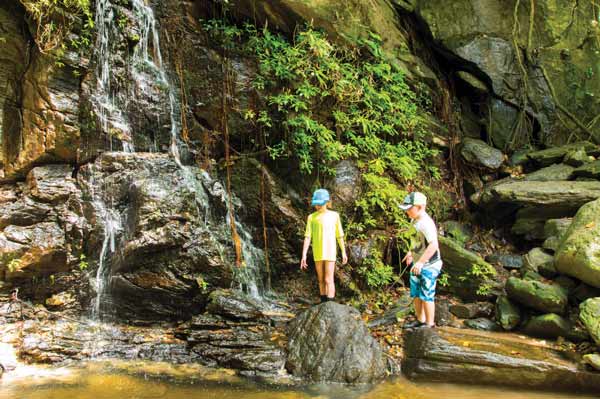 Visitors to Guanaja will enjoy exploring a lush tropical landscape above. Photo by Lois Hatcher.

When You’re Not Diving

When you’re not under water here, you’ll likely still be immersed in the beautiful blue Caribbean one way or another.

Deep-sea fishing is popular here. Hire a local fishing guide to take you out and catch your dinner. Combine your fresh catch with some locally grown produce and you might enjoy one of the freshest meals you’ve ever had.

Explore the water on your own. There is excellent kayaking and paddle boarding just off the beach. Take along snorkel gear and explore the shallows.

Beach combing can be done along one of the barrier reefs that connects Graham’s Cay to Clarks Cay. There is a natural “sidewalk” on top of the reef crest. Bring sturdy water shoes, avoid walking on live coral and be prepared to spend a few hours poking around in the shallows.

Favorable winds make Guanaja a kite boarder’s paradise most of the year, with conditions suitable for all levels, from beginners to the accomplished.

For some time on terra firma, plan a hike through some wild, gorgeous terrain, including lush jungles on your way to the only waterfalls in the Bay Islands. Keep an eye out for tropical birds, including clouds of jewel-colored hummingbirds.

After a long day of exciting activities relax with a massage in your hotel room. You can book a masseuse from Bonacca Town to come to your room with a professional massage table.

Relax and let go the stresses of civilized life while the soft Caribbean breezes keep you cool and the sounds of the water lulls you to sleep.

I left Guanaja feeling relaxed, thanks to the natural beauty of the island and the friendly nature of the locals. I also left feeling excited, with a portable hard drive full of colorful underwater photos to edit and share. As I said before, I fully intend to return to the Bay Islands for more.

Story and photos by Lois Hatcher