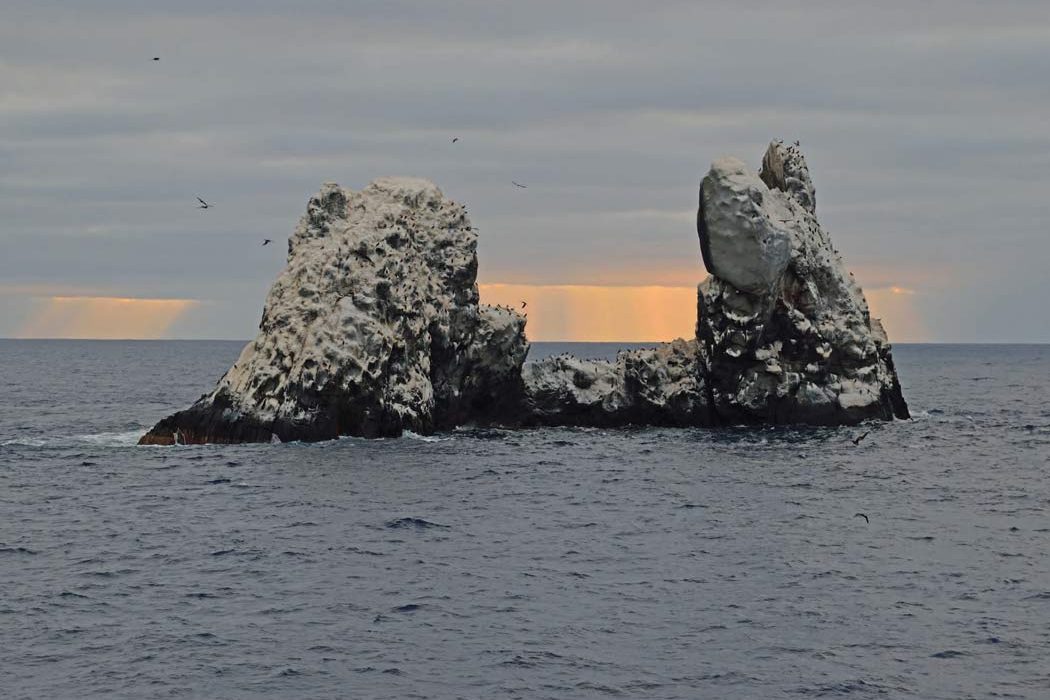 The Revillagigedo Islands (rev E ah he HAY dose) are a mouthful. Some divers simply default to calling them Socorro, which is one of three islands and one very big rock — Clarion, San Benedicto, Socorro and Roca Partida — that make up the diver’s paradise of Mexico’s Revillagigedo Islands Archipelago. The archipelago is part of a submarine mountain range, with the volcanic peaks emerging as islands. Located some 240 nautical miles southwest of Cabo San Lucas, Mexico, it takes between 26 and 30 hours to arrive by liveaboard vessel. There is no airport and there are no hotels, no developments and no civilian human inhabitants here. Just a small Mexican navy contingent on Socorro Island and an even smaller one on Clarion Island, which is rarely visited due to its distance from the other islands. What you will find here reads like a “who’s who” of big stuff — including dolphins, whales, giant manta rays, sharks and more. 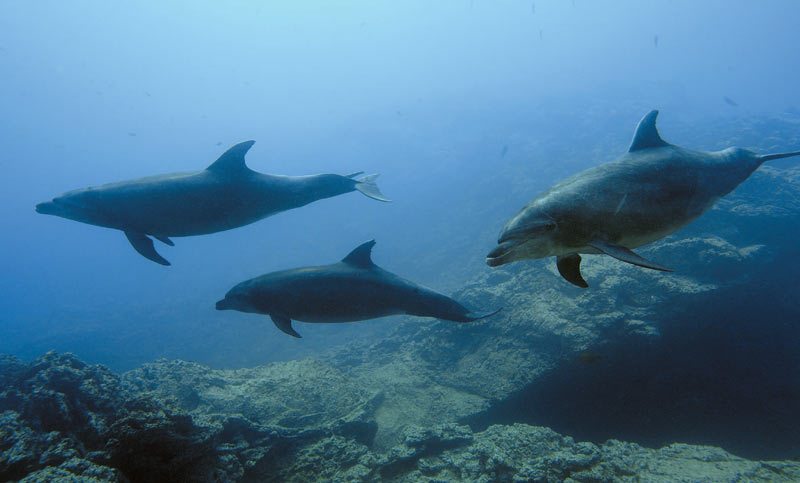 Bottlenose dolphins come in close as if to greet divers. Photo by Joseph C. Dovala.

The small island chain was discovered in 1533 by the Spaniards and then visited over the years by expeditions going elsewhere. In 1861, President Juarez of Mexico placed them under control of the state Colima. He had plans for a federal penitentiary to be located on Socorro. For a number of reasons, it never came to fruition. This is a good thing, because if a prison had indeed been built there the underwater realm might not be as rich in biodiversity. There has been no evidence to indicate any earlier habitation, which isn’t surprising, since there is no permanent source of fresh water on any of the islands. The total land area of the three islands and islet is just short of 61 square miles (158 km2) with Socorro taking most of this at 51 square miles (132 km2) and Roca Partida being the smallest at only .05 square miles (.13 km2). These islands have a number of endemic land species, which has earned the nickname of Mexico’s “Little Galapagos.”

The area represents an exceptional convergence of two marine biogeographic regions: the Northeastern Pacific and the Eastern Pacific. More specifically, the property lies along the junction where the California and Equatorial currents mix, generating a complex and highly productive transition zone. The islands and surrounding waters are rich in marine life and recognized as important stopovers for wide ranging species.

Each of the islands displays unique characteristic terrestrial flora and fauna. The relative isolation of each island has resulted in high levels of species endemism, particularly among fish and bird species, many of which are globally threatened. The islands are important to seabirds. Species included are the masked, blue-footed, red-footed and brown boobies, red-billed tropicbirds, magnificent frigate birds, to name a few. This is the only place in the world where the critically endangered Townsend’s shearwater breeds.

In 1994, the Revillagigedo Islands gained United Nations Biosphere Reserve status. That is, international recognition of a particular ecosystem to promote scientific understanding, sustainability and some protection. All boats that enter the proximity of the islands may do so only with permits. 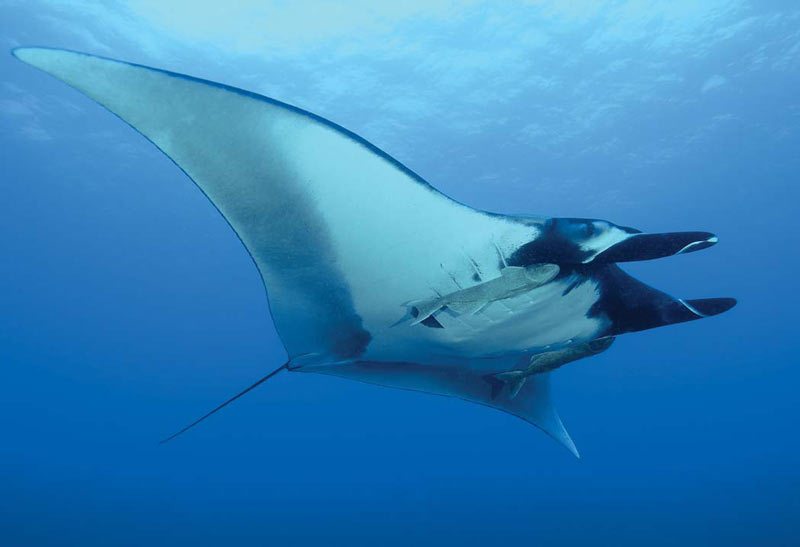 Rev’d Up Diving in Revillagigedo

The voyage begins by embarking on a live-aboard in Cabo San Lucas, Baja, California. Some 28 hours later you wake up to find yourself in view of San Benedicto Island. It looks about as primordial as anything you’ll see in a movie. The volcanic cone is only 65 years old — a newborn in geologic terms. However, the apparent bleak ness topside belies what lies beneath the waves.

The Revillagigedo Islands are a long way away from anywhere and the diving can rightly be classified as “high adrenaline.” The remoteness is one reason why divers making this trip should have advanced or higher training and experience. All divers should be familiar with diving from small boats, as most diving is done off tenders from the mothership. Excellent buoyancy skills are required here, as safety stops will be performed in blue water. The pre-dive briefings are detailed and thorough. After the detailed discussion, each dive team is assigned to one of the tenders. Once on the tender you’ll gear up for a quick ride to the site, so it’s important to pay attention and be ready to splash when the captain yells, “Go!” When the bubbles clear, it becomes obvious why you made the trek out here. Entire shoals of jacks, pods of bottlenose dolphins, groups of clarion angels assault your vision and sharks are everywhere you look. By the time the first day’s diving is over, the dive deck and salon is abuzz. Everyone’s minds are blown. They’re all talking at once until one of the crew passes through and quips, “Y’all haven’t seen nothin’ yet!”

The next stop is Socorro Island proper. Larger than the others, it has the better overnight anchorages — also, this is where the Mexican navy will board the vessel for inspection. The official visit can take some time, so relax and be patient. As soon as it’s finished you’ll be whisked away to the next immersion. The rugged under water topography can be quite striking. Sharp cuts, steep terraced walls and nearly perfectly flattop shelves rise from the floor. All this vertical topography is great for ducking out of any prevailing currents too.

Socorro’s size also means longer drift dives on both outer and inner reefs. While winding through the lava mazes we had a number of shark encounters. Silkies, duskies and Galapagos all appeared. The Revillagigedo Islands are known for manta rays and we saw at least two on every dive. That’s a pretty good track record, but the crown jewel was next on the itinerary.

Roca Partida or “The Rock,” is the very definition of the superlative. We, of course, heard stories about the goings on here but really, how good could it be? The tiny islet is miles from its closest neighbor, Socorro Island, and has no protection from prevailing oceanic conditions. There are no anchorages and the water is hundreds of feet deep up close to the shear walls. Currents, ocean swell and wind all conspire to make diving here a hit or miss proposition.

Late in the night we had motored from our anchorage at Socorro Island and woke up to Roca Partida under a cloudy sky but smooth ocean. The pre-dive discussions are even more important here because of the depths and the open ocean environment. The usual banter seemed a little more subdued as we motored the short distance from the ship. Scores of gulls and cormorants squawked as we arrived in the tender a mere 20 feet (6 m) from their cliff perches. “One-two-three,” over the side we went. The 100-foot plus (30+ m) visibility practically takes your breath away.

Everywhere we looked, something was going on. A half-dozen dolphins came gliding by so close we could practically reach out and touch them. Hammerheads were off in the distance. A giant school of unidentified fish swirled around us before flying off into the blue. Several giant mantas slowly winged over and under us. Strobes were firing everywhere. Hoots, hollers and yelps of joy could be heard from divers all around us. There’s no doubt that Roca Partida rocks! Yeah, it’s that good. 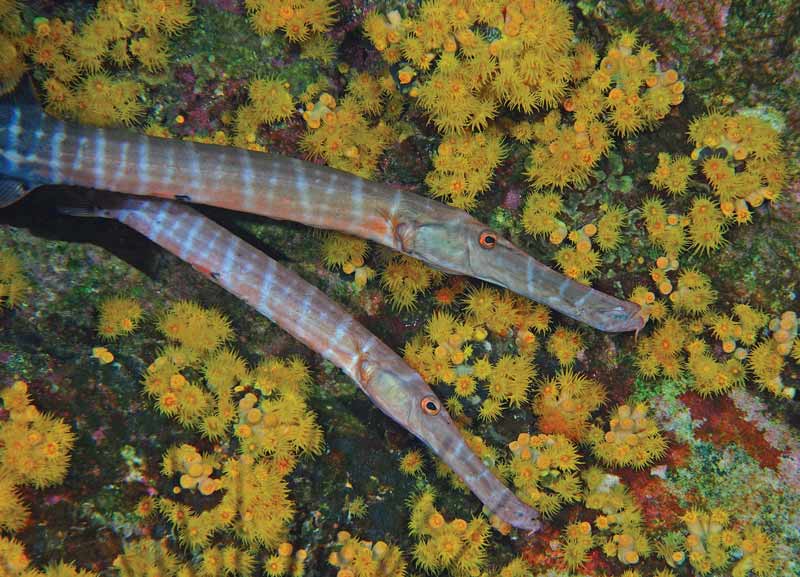 A pair of trumpetfish tries to blend in amongst the rocks. Photo by Joseph C. Dovala.

It takes a couple of dives to settle down and start to really pay attention to the incredible fecundity of life at Roca Partida. Besides all the big pelagic critters cruising around, the steep underwater walls are a hustle and bustle of smaller marine life. I’ve never seen more or such varied trumpetfish in one place. Puffers, hogfish, clarion angels, morays and small fry — the list goes on and on. In most of the nooks and crannies it was common to see a dozen or so white tip sharks stacked like cord wood. And after your brain just can’t handle any more of the big marine life, grab a light and check out the craggy cliff faces. A word of caution here: use care when exploring near the rock face in a heavy swell. Pay attention to the advice of the divemasters, as they’ll tell you when and where it’s safe.

On a recent trip, the topside conditions were good enough that we spent the night near Roca Partida. Expectations soared after the day before and we couldn’t wait to get underwater again. By now the entire team had a pretty good handle on tender diving. With military precision we made our first drop of the day very close to the previous day’s jump. Whoa, wait a minute; the water was green and not just a little bit either. Visibility was down to 40 feet (12 m) and the temperature had dropped too! What was going on here? Well, now it was time to pay the price for such bountiful life. There’s a reason so much marine life congregates here. A massive plankton bloom had taken over and hung like the thick clouds in the sky, signaling it was time to spend some quality time viewing close-up life on the undersea cliffs.

Paying more attention to the life on the cliff face yielded even more surprises. There were multiple species of moray eels, puffers, damsels and all manner of invertebrates. Every single hole or crack proved to be a hiding spot for one cool creature or another. As before, some of the larger depressions had a compliment of white tip sharks. It’s quite amusing to fin up to one and see a dozen sharks all piled in headfirst, with nothing but their tails sticking out. Even when conditions are less than ideal, Roca Partida still shines. 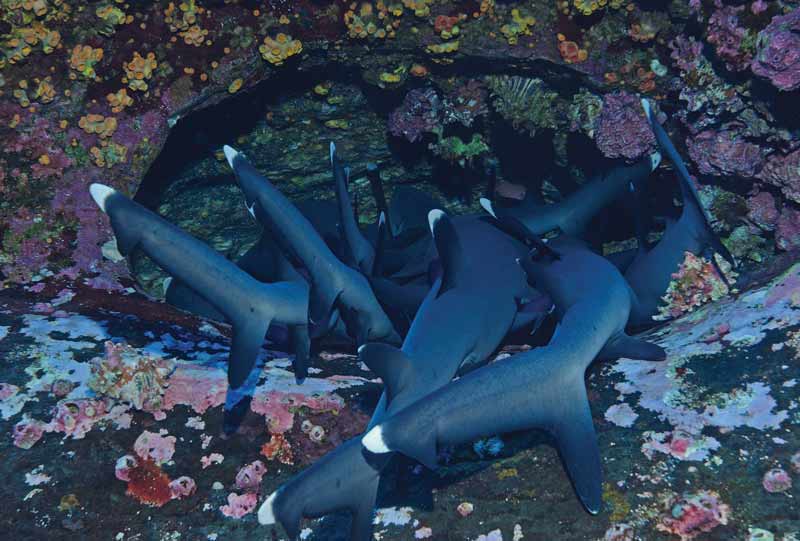 White tip sharks stack up on top of each other for a nap. Photo by Joseph C. Dovala.

It doesn’t matter whether you call this place Socorro or Rev-a-googlia or whatever. The Revillagigedo Islands Archipelago is a very special place and the live-aboard dive boat operators working here are among the best in the world. While the diving itself is not extreme or terribly difficult, it is the remoteness of the location, the deep depths and the combination of other environmental factors that make Socorro a location best suited for those who have perfected their small boat entries and exits, can demonstrate expert buoyancy skills and are willing to adhere to strict safety protocols. I can honestly say that if the long boat ride to reach the Revillagigedo Islands is the price of admission, it’s a bargain. 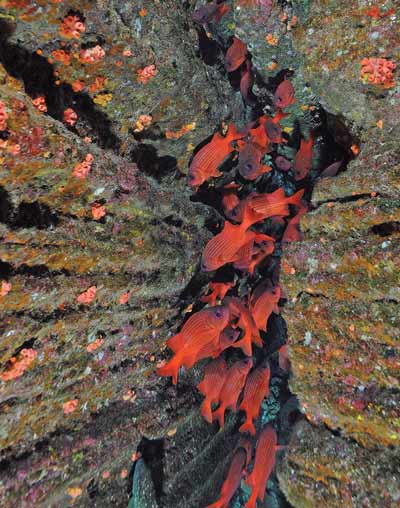 Cardinalfish seek shelter in one of many cuts of volcanic reef. Photo by Joseph C. Dovala.

Location: The Revillagigedo Islands are in the Pacific Ocean, about 497 miles (800 km) west of Manzanillo, Colima, Mexico.

Tipping: Gratuities should be based on quality of service, with ten percent or greater of the charter price considered an average tip.

Getting There: Boats leave from Cabo San Lucas area. This is the shortest overseas route to islands. Several major airlines fly into Cabo San Lucas.