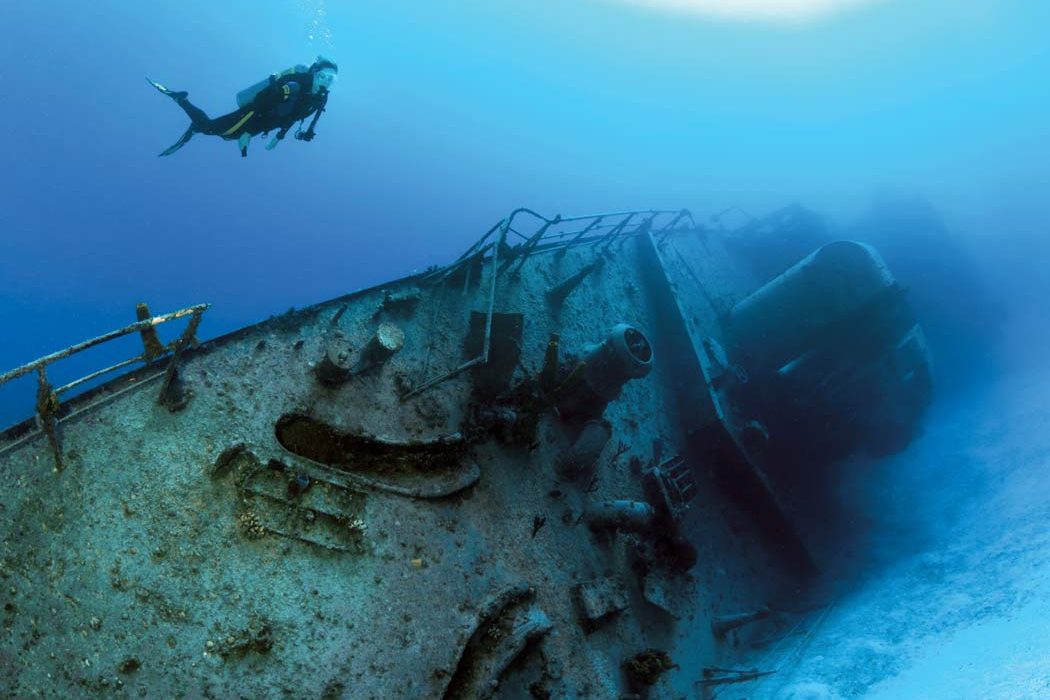 The Cayman Islands have a well-deserved reputation as a leading dive destination, with beautiful sugary-sand beaches, clear water and pristine diving and snorkeling. Grand Cayman, the “big sister” to the smaller Sister Islands of Cayman Brac and Little Cayman, garners most of the attention because she offers a wide range of resorts, tourist activities, duty-free shopping and fine dining options. Grand Cayman is also a popular port of call for cruise ships. But the two smaller Cayman Islands should not be dismissed as ugly stepsisters. In fact, each Sister Island possesses a distinctive natural beauty that runs more than skin deep. For divers, this beauty extends across the reefs and thousands of feet into the deep blue abyss.

All three islands are exposed tops of the Cayman Ridge extending from Cuba to Belize. They are limestone in nature and lie about 150 miles (241 km) south of Cuba and 180 miles (290 km) west of Jamaica. The three-mile (4.8 km) deep Cayman Trench runs between these islands and Jamaica. To the south is the Bartlett Deep at just over four miles (6.4 km) in depth. In actuality, The Cayman Trench and Bartlett Deep are all part of the same transform fault zone; there is no continental shelf. Regardless, all this deep water makes for some diverse diving and exciting walls. Cayman Brac is roughly 14 square miles (36 km2) of land area and Little Cayman is close to 10 (25.6 km2). Cayman Brac is 90 miles (144.8 km) east-northeast of Grand Cayman and sits 12 miles (19.3 km) long by just over a mile (1.6 km) wide. It has a bluff that reaches a height of 140 feet (42.7 m) at the eastern end, a natural feature not found on the other islands. Little Cayman is 5 miles (8 km) west of Cayman Brac and has a maximum elevation of 40 feet (12.2 m). The island is roughly 10 miles (16.1 km) long and 2 miles (3.2 km) wide. Because of the porous nature of the limestone and relatively low elevations of the islands, there are no rivers or streams.

Christopher Columbus is credited with being the first European to discover the Cayman Islands in 1503. However, the first Europeans to land were most likely sailors from Sir Francis Drake’s West Indies expedition of 1585. At this time large numbers of sea turtles and saltwater crocodiles called caimans were the main inhabitants. As you might suspect, the Cayman Islands got their name from the crocs. Many visitors set foot on these isles over the next couple hundred years including buccaneers stocking up on turtle meat. The first actual settlers arrived in the early 1700s. They primarily engaged in subsistence farming, fishing, turtling and, in time, began boat building. Though part of the British Empire, the Caymanian people pretty much governed themselves. In 1831, the first elected legislature was formed and by 1863, the British Parliament declared the Cayman Islands a dependency of Jamaica. The Sister Islands, Cayman Brac in particular, were settled in the mid-1830s. By 1962, Jamaica chose independence from Great Britain but the Cayman Islands remain aligned with Great Britain to this day. 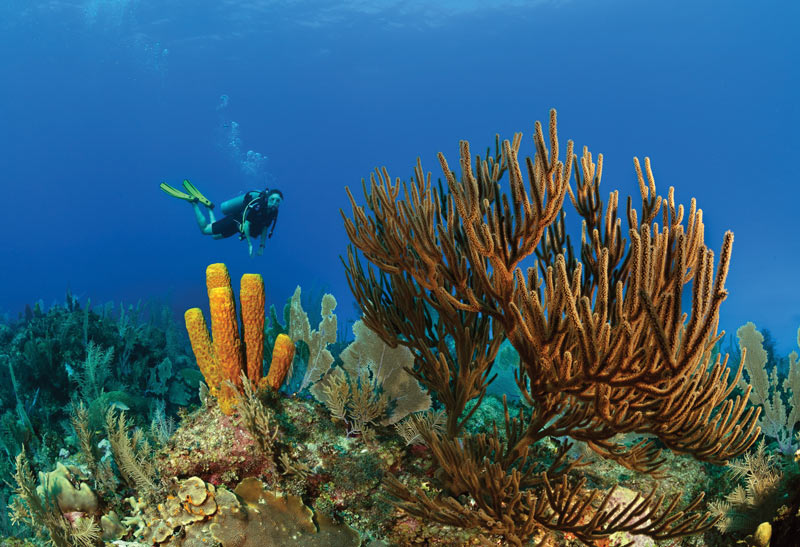 The reefs off Cayman Brac are a healthy mix of hard corals, soft corals and sponges.

All three islands feature full-service dive operations offering a wide range of services for divers of all experience levels, from shallow sites perfect for beginners to depths suitable only for hardcore techies. Guided boat trips take divers to spectacular sites, most located within half an hour’s ride from shore. Shore diving is also available. Underwater visibility is consistently in the “excellent” range, averaging from 60 to 100+ feet (60 to 30+ meters). A light skin suit or 3-mm wet suit will suffice, as water temperatures range from 70 to 85 degrees Fahrenheit (21 to 29.4 degrees Celsius) year-round.

Each island offers its own signature sites, but for now we’ll highlight the Sister Islands, which might be smaller in total landmass than Grand Cayman, but do not lack underwater majesty. 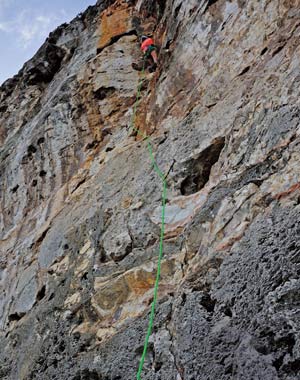 Cayman Brac is becoming a hotspot for climbers.

The 90 miles (144.8 km) between Grand Cayman (GC) and Cayman Brac can be covered in an island-hopping flight lasting less than 30 minutes. The Brac’s small airport is a joy. Cayman Brac has most of the 2,000 or so inhabitants of the Sister Islands; only about 10 percent of these folks make Little Cayman home. Contrast this to GC with a population of well over 60,000. Of course, there are fewer dive operations on Cayman Brac but there is no shortage of available dive sites. The Brac even has a famous artificial reef called the M/V Captain Keith Tibbetts. The Russian frigate was picked up in Cuba and sunk on the northwest side in about 100 feet (30 m) of water in 1996. More on this site later.

Most of the 60-odd dive locations are clustered around the north and southwestern tip of Brac. A few are spread out on the south side mid-island and a few dot the northeast end. Most of these sites are a short boat ride from shore. One in particular, Elkhorn Reef Forest, is home to the friendliest grouper I’ve ever seen. Its name is Shorty and it not only seeks out contact with divers, but will rest in your open palm and pose for photos like a champ. We spent at least 20 minutes with Shorty before the grouper tired of our company and slowly swam off. Besides Shorty, we saw the biggest nurse shark I’ve ever seen in the Caribbean, which was at least 7 feet (2.1 m) long. Other local sites like Grunt Valley, Sea Feather Wall and Angel Reef, are favorites with the dive staff.

We tied up on the aft buoy of what many consider one of the signature dive spots of the Sister Islands, M/V Captain Keith Tibbetts, and were quite pleased to see flat cobalt blue water over her. The sunken vessel was named after prominent resident, Captain Keith Tibbetts, who was a member of the Legislative Assembly and owner of a popular variety store on the Brac. The 330-foot (100 m) former Koni Type II Class Russian frigate #356 was built in 1984, in the former U.S.S.R., for the Cuban navy. Her short career was spent most of the time languishing in the Cuban heat until the boat was purchased by the Cayman Islands. When sunk, she originally rested upright on the seafloor, but hurricane Ivan split her in half and now the bow lists to port. Nature’s redecorating job makes the site appear more like a “real reef” now and you can poke around the scattered area looking for critters. Two goliath groupers named Boris and Natasha also make the ship home along with a cadre of eels, glassy sweepers and scores of wrasses. Nearby are a series of reef structures as well, so there is a lot of good diving on, in and around this ex-Russian warship. 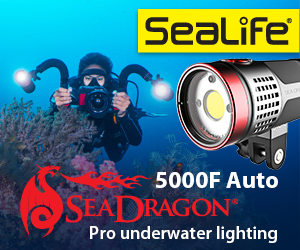 One of the unique things about Cayman Brac is the 140-foot (42.7 m) high bluff that culminates at the east end of the island. It has started to become world renowned for its rock climbing opportunities. It’s quite possible to “dive the wall — climb the wall” on your vacation here. For you climbers out there, routes vary from 5.8 to 5.12d with possible 5.14 ranges on the Yosemite Decimal Rating System. The tropical views from the bluff are stunning and there is now a full-service climbing operation on the island to equip, train and set up the climbs. 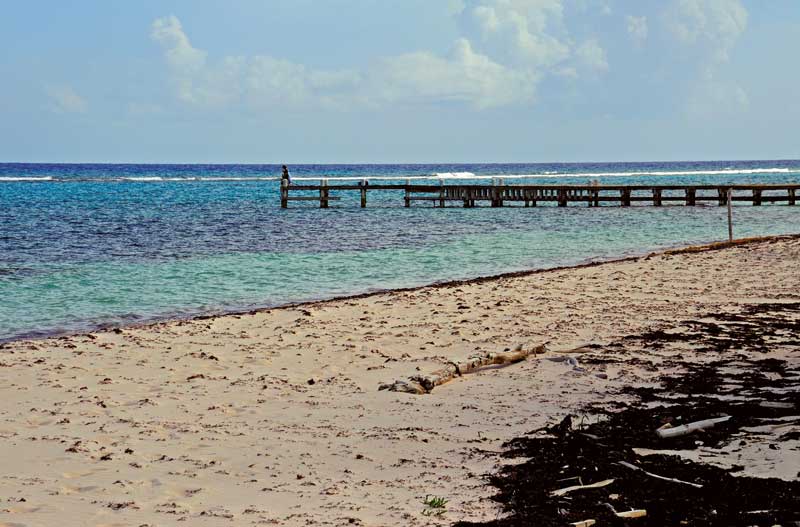 Sand and sea and solitude await on Little Cayman’s beaches.

The flight from Cayman Brac to Little Cayman is a take-off, a blink and a landing. From take-off to wheels-down it’s less than 15 minutes. However, that quarter of an hour takes you even further back in time to when these Caribbean Islands were just sleepy little hamlets. With fewer than 200 residents and an actual visitor “season” it can appear you’re on your own island. The only “town” is Blossom Village and most of the island is undeveloped. While it may be small, the diving is all Cayman!

There are nearly 60 published sites with nearly a third of them on or near Bloody Bay Wall. The Brac has the Tibbetts and Little Cayman has the wall. Bloody Bay Wall is about a mile long (1.6 km) and part of it begins in less than 20 feet (6.1 m) of water. This is a true sheer vertical wall with the bottom over a thousand feet below — don’t drop anything! Be sure to practice good buoyancy control and monitor your gauges when wall diving, because it’s easy to accidentally descend deeper into the clear deep blue than you’d planned. The guides do their best to drill this into divers’ heads in the pre-dive briefing, so please pay attention to your depth, air supply and dive plan. Bloody Bay Wall is within a marine protected area so underwater life here tends to be more prevalent and easier to approach than unprotected zones. Keep an eye out into the blue, because you never know what “big stuff” you might see cruising by. It’s exciting diving.

Marilyn’s Cut is one such exciting site. Horse-eye jacks, Nassau groupers and scores of squirrelfish cruise all the cuts and caves that litter the area. With names like Great Wall, Sarah’s Set, Eagle Ray Roundup and Mike’s Mount you’re sure to fill up that logbook with some solid dives. At a place called Great Wall West, we watched a green turtle and a porcupine fish having some kind of disagreement. They tussled for a while and then went their separate ways. They looked annoyed and us amused. We could only wonder what that was all about.

There are nearly 20 official dive sites right off the southwestern tip as well. These tend to be very short boat rides, some lasting less than 10 minutes. They make perfect jump-off spots when the ocean kicks her heels up on the northern side. Charlie’s Chimney is one of the favorites here with turtles often cruising around. These southwestern sites are part of another marine reserve called Preston Marine Park. With most of the island under protection, good diving can be had just about everywhere. Rays are one of the signature marine animals of the Caymans, and near Charlie’s Chimney is a shallower spot named Grundy’s Gardens where they proved the point. Several eagle and southern stingrays gracefully danced around us for a good five minutes. Their underwater ballets are always a treat and rate very high with most divers. 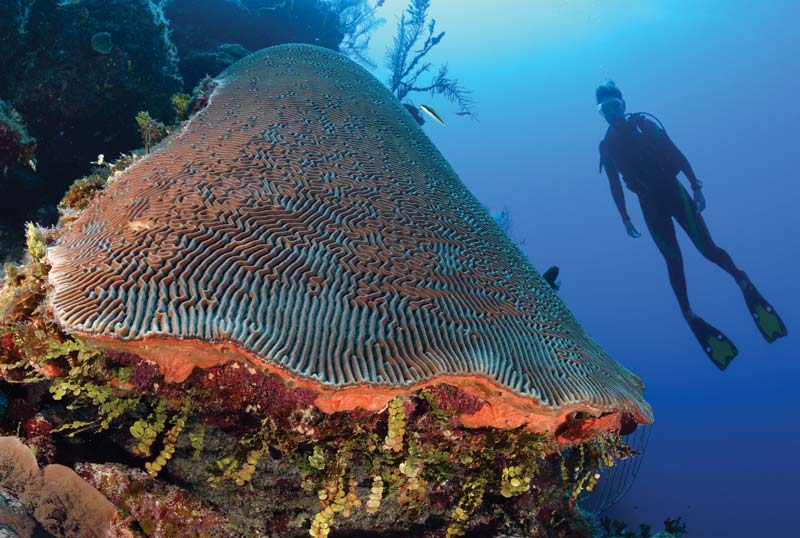 While Little Cayman only has one gas pump and a small school that stops at the sixth grade, it is the base for the Central Caribbean Marine Institute (CCMI). The institute is a non-profit organization that studies the surrounding coral reefs and the critters that live there. CCMI is doing extensive work on the invasive lionfish and the roles herbivores play in the health of the coral reef. Coral spawning, fish population data and ocean chemistry are just a few of the ongoing projects. School children are invited on field trips and researchers from around the world come to do experiments. In addition, CCMI sponsors Sea Camp, a program for students to immerse themselves in ocean-related endeavors.

Little Cayman is also a bird watcher’s paradise. While all the Caymans have good populations of birds, the largest breeding colony of red-footed Boobies in the western hemisphere is located here; in addition to the only rookery in the Cayman Islands for the magnificent frigatebird. West Indian whistling duck, brown booby, black-necked stilt, belted kingfisher, egrets and herons are just a few of the other winged inhabitants here too. Rock iguanas and various land crabs round out the non-two legged locals.

The beaches, the beautiful clear water and the dramatic diving are features all three Cayman Islands have in common. But beyond their family resemblance, each island has features unique and all her own. Plan a visit to the smaller Sister Islands and you’ll understand what I mean.